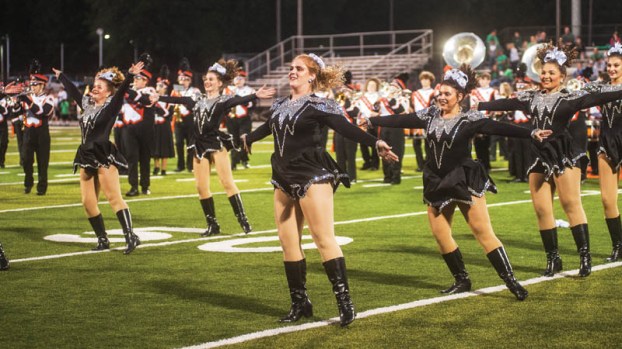 Members of the Ironton High School majorettes perform during the half time show at Tanks Memorial Stadium.

IHS Guard to perform at Disney

This fall, a group of girls from Lawrence County are headed to Walt Disney World to represent the region.

Twelve members of the Ironton High School Guard are set to take part in Dance the Magic, from Dec. 1-3 at the resort theme park in Florida.

“They have been selected to perform in Orlando as part of the holiday special,” Valerie Freeman, who serves as an assistant to the group, said.

She said the students were selected in the spring after auditioning.

“They saw our videos and our choreography,” she said, stating the audition came about as part of the group’s past work with Educational Performance Tours, for which they have traveled to events throughout the country, such as New York City and Nashville.

“It’s a once in lifetime opportunity,” Freeman said. “Many of them have never been to Disney World before. Many have never flown before.”

She said the group has been working on fundraising for the trip, since being selected in the spring.

“It’s been a large campaign since they were invited in May,” she said of the preparations for departure, set for Nov. 29. “We’ve had lots of donations and the students have worked hard at local and Tri-State events.”

She said the group is still taking donations and sponsors will be listed on the students’’’ travel shirts, as well as in print advertisements.

She said those interested in donating can contact her, or her mother, Patty Freeman, who is the group’s advisor, at the Ironton Board of Education office at 740-532-4133.