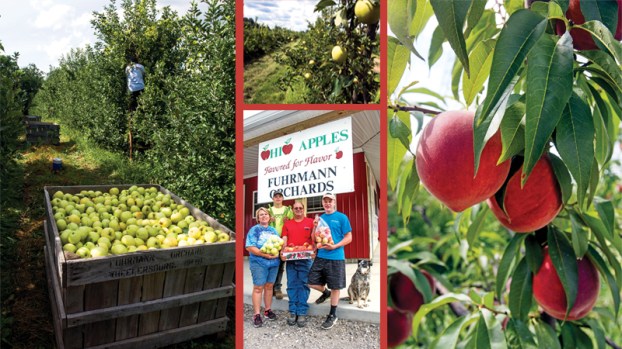 Fuhrmann Orchards have been raising produce for 60 years

For almost 60 years, the Fuhrmann family has been growing fresh fruits and vegetables on their farm and orchard in Southern Ohio.

After current owner Paul Fuhrmann’s parents, Karl Peter “Pete” and Susan Fuhrmann got married in 1958 and Karl, a baseball player for the Cleveland Indians Farm Team, blew out his shoulder, the couple settled in Wheelersburg.

Fast forward to the 1980s, and Paul’s brother, Karl Peter “Pete” Fuhrmann IV, returned to the farm after graduating from Michigan State. Paul, who studied agricultural economics at Purdue — where he met his wife, Leanne, came back in 1987.

“The plan was for me and my brother to take over for Mom and Dad,” Paul said. Sadly, Paul’s brother passed in 1990. Four years later, his dad passed.

“That left Mom and me,” Paul said. “Leanne helped when she could, but she was also working at Ohio State as a horticulture research assistant.”

At the same time that the farm was expanding, Paul and Leanne’s family was, too. The couple had triplets: Melanie, Jeremy and Andrew in 1998. They joined sisters Lora (born in 1992) and Abby (born in 1995).

“Me and my four siblings have grown up on the farm,” Abby said. “We were brought up doing things in the orchard. I’ve been attending farmers markets since I was 10. It’s something I love to do. We’ve learned to appreciate what we do and the hard work that goes into it.”

Now, each of the children are following their own paths — Lora is an athletic trainer, Abby is in her senior year at OSU studying math and science education, Melanie is studying agriculture at OSU, Jeremy is going to Purdue and has enlisted in the National Guard and Andrew will be studying fermentation science at Eastern Kentucky — but continue to help out on the farm, which now spans 340 acres.

“We are the largest growers south of 70,” Paul said.

Ninety of those acres are in Wheelersburg and 250 are in in Lucasville, where the orchard is located.

“We have 40 acres of apples,” Paul said. “The majority of our apples come from Lucasville. The orchard is on hilly terrain, and the higher altitude is better for growing.”

“However, we don’t do pick-your-own because it’s not easy to get up to,” Abby added.

Out of the 34 apple varieties the Fuhrmanns grow, some of the biggest sellers are Golden Delicious, Granny Smith, Jonathan, Fuji, Law Roman, Matsu and Honeycrisp. Two new varieties: Evercrisp, a mix between Fuji and Honeycrisp, and Somerset are being planted next year.

“We’re excited to get some new ones out and be the first in our region of Ohio to have them,” Abby said.

To showcase their harvest, Fuhrmann Orchards is hosting the third annual AppleFest on Oct. 14 from 10 a.m.-5 p.m. The event will feature apple tastings, apple desserts, hot cider and slashes as well as pumpkin painting, corn maze and orchard wagon tours.

“It’s a chance for us to show people what we do, that they can come to us for local fruits and vegetables and that we do this full-time,” Abby said. “It’s also our way of saying ‘thank you’ to our customers.”

Though they are a staple, Abby added that apples aren’t the only item available during the fall months.

“We’ll still have some produce — tomatoes, green beans, peppers,” she said. “And in October and November, we’ll have pumpkins, gourds, squash …  all the different fall necessities.”

The family also offers school tours in September and October.

“We give an overview of how apples are grown, let them tour our packing facilities, go through the corn maze and the orchard, and they get to take a little pumpkin back with them,” Leanne said. “It’s our way to educate future consumers because people are so far removed from the farm these days.”

In addition to the farm, which is typically open to the public from 8 a.m.-6 p.m. Monday – Friday and 8 a.m.-5 p.m. on Saturday from around mid-July to Christmas (“We don’t stop selling until everything is gone,” Abby said), Fuhrmann Orchards also sells to Deemer’s Super Market in Wheelersburg, Minford IGA and Westside IGA in Portsmouth, The Wild Ramp in Huntington and Food Fair locations in Ohio, West Virginia and Kentucky. During farmers market season, Fuhrmann Orchards can be found in Portsmouth on Tuesdays, King’s Daughters Medical Center in Ashland on Thursdays and Kyova Mall in Ashland on Saturdays.

“Leanne and the kids do all the farmers markets,” Paul said.

Abby added that the family is trying to expand their supply of apples into the local school systems.

“A handful in our county have decided to buy apples from us weekly,” she said.

Schools, after-school programs, restaurants and other places interested in sourcing apples and/or produce from Fuhrmann Orchards only need to get in touch.

Cindy Black’s love of literature, music fills the shelves of Consigned Books Over the years, Cindy Black has amassed a... read more