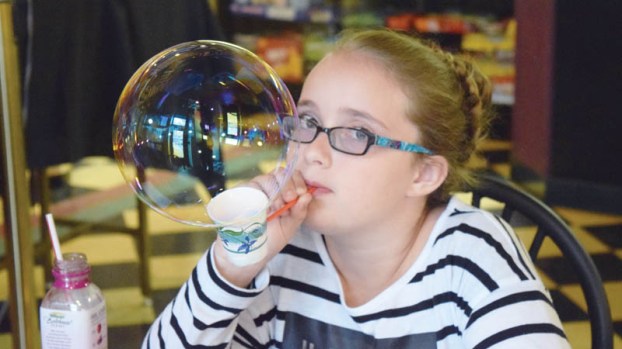 Allie Guhl, 10, a homeschool student, blows a bubble during the Mad Scientist class at the fall camps at the Paramount Arts Center in Ashland last Tuesday.

A different kind of learning

ASHLAND — Art, science and dance are just a few of the offerings at the fall camps for children and teens at the Paramount Arts Center.

One of the most popular in this season’s camp is the Mad Scientist class, offered on Tuesdays, which gives children a hands-on learning experience with experiments and activities centered around the fundamentals of science.

The 12-week class is taught by Melanie Rockwell and it is her first time as an instructor at the Paramount. In addition, Rockwell said she just started as a fourth grade teacher at Ironton Elementary last month.

Clad in a white lab coat, she leads 10 children in a variety of projects each week. For last week’s class, they created a bubble solution out of water, corn syrup and dishwashing liquid and built their own blowers from straws and paper cups.

Allie Guhl, 10, a homeschool student, said in addition to the Mad Scientist class, she has taken classes at the Paramount before.

“Once I did a robotics class,” she said. “It was awesome.”

She recommended Rockwell’s class to others.

“It has a lot of science and I think everyone who likes science should do it,” she said.

Gary Newman teaches the “Color Explosion” class on Mondays in the Marquee Room.

Seven children, ranging in age from five to 12, worked on pastels.

Newman said that one of the girls, Gracie, was “a veteran,” only missing one session of the five times his art class has been offered.

He said the class is good for students in that it gives them more exposure to art that they may not receive in school.

“Some art teachers only get about 30 minutes a week with kids,” he said.

Newman had the students start with a timed exercise, in which they took one letter from their name and made a colorful drawing with it.

Afterward, he posted all of the drawings on a rack and gathered the group around for a critique session.

He began by emphasizing that “no negative comments” were allowed, then had them discuss each of the pieces. He asked the group what they liked about each piece.

Focusing on one drawing by 12-year-old Molly, a homeschool student in the class, he praised her use of colors, noting that she used cool colors for the letter and warm colors for the background.

“What happens when we do that?” he said. “We create contrast.”

Down the hall, Emily Prichard and Samuel Perkins were teaching an ABCs of Acting and Improv class.

Both are regular performers in productions of the Paramount Players and shared their acting experience with three students, who they had do improvised monologues on various topics, incorporating a range of emotions.

Claire Elliott, 9, was asked to pretend she was speaking about the death of a cat.
She recounted her emotions of the hypothetical pet, discussing sadness and her bond with the animal.

But at one point, noticing her friends watching, she broke character and laughed.

Prichard told her sometimes it is hard to remain serious in a performance when doing it in front of friends and that it is a skill she and Perkins had to acquire.

“Acting is uncomfortable,” she said. “We have to get past the fact that people might laugh at us.”

She said a believable performance can cause the audience to share emotions.

“You might be able to get them to cry with you,” she said.

In addition to the science, acting and drawing classes, other courses offered at the fall camps included a hip-hop dance class, taught by instructor Shawn Terry, a hands-on music class and a sign language class.

Allison Hammond, production and stage manager for the Paramount, said the camps are offered throughout the year in different session. Although classes for fall have started, she said it is not too late to sign up.

“We still take kids throughout,” she said.

For information on the offerings, visit www.paramountartscenter.com