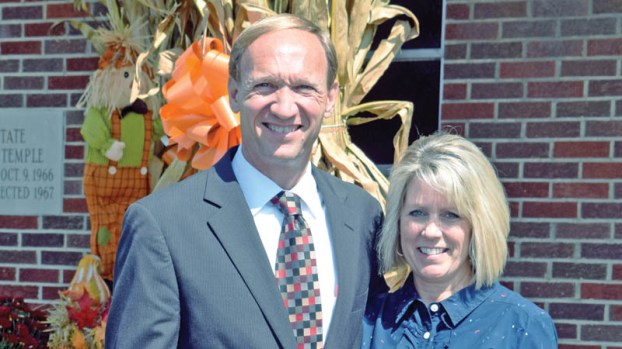 SOUTH POINT — Tim Jenkins says he’s been where the Lord wants him for the past 10 years.

Earlier this month, he and his wife, Angie, celebrated 10 years since he became the pastor of Tri-State Baptist Temple in South Point.

“It was the first Sunday in September, so it was on the third,” he said of the milestone.
Jenkins, a Hecla native, said he first came to the church in the 1990s, when he served as an assistant to pastor Earl Sammons.

“Then the Lord moved our family to Tennessee, where I was a pastor for 12 years,” he said.

He said he came home in 2007, after Sammons retired and the church asked him to take the position.

Jenkins said his church has a healthy congregation, though it may not be as large as some churches.

“We say, though we’re a small church, we do big work for the Lord,” he said. “The group of people who are here are great servants.”

Jenkins said his path to the position is different from some, in that he did not intend to pursue it from a young age. He attended Ohio University for a degree in computer science and business administration.

He said he turned to his current path while in college, and, following graduation, took a part-time job, while working on a correspondence course for Bible college on his days off.

He started preaching in 1992, and he said he and his wife became full-time Christian servants in 1996.

He said Tri-State reached out to him a few times after Sammons retired, but he turned them down, feeling he was not ready to leave Tennessee.

“I did not feel the Lord was finished with me there,” he said.

When he decided that he wanted to return home, he said he hoped to hear from them again.

“I said ‘I can’t call back the place that I’ve turned down three times,’” he said. “But they called again two days later.

Jenkins said the church had been without a pastor for a year when he took the job, and, as a result, had been going through a bit of drought.

“But since, we’ve seen a lot of growth and a resurgence,” he said, noting that a lot of young families come to the church.

“We’ve had four babies born recently and we have 10 toddlers who are three years old or younger,” he said. “As a pastor, I like seeing that.”

He spoke of the services offered by the church, such as the daycare center, which has been in operation for some time.

“It’s one of the best in our community.”

“We see a lot of brand new families,” he said. “We minister to them and help them find a local New Testament church.”

Jenkins has one daughter, Lydia, married to his assistant at the church, and a granddaughter, Phoebe. He said he is blessed to be where he is now.

He said the church “is the most important part of a community.”

“You don’t have to be Biblically-minded to see the drift of our country and community away from those foundations,” he said. “And a lot of churches have become more entertainment than Bible-oriented.”

He said his mission is to minister to the community and provide what is necessary.

“People need to settle on a Biblical foundation to build homes and a family.”

Upcoming events at the church include a homecoming this Sunday, with services at 10 a.m. and 11 a.m., and Hallelujah Festival, set for Oct. 24 from 6-7:30 p.m., which will feature hayrides, inflatables, hot dogs and more. Jenkins said the community is welcome and invited to attend.

One of 21 local recipients of McDonald’s grants RLB Ministries, the non-profit umbrella organization of the Backpack Buddies program through... read more