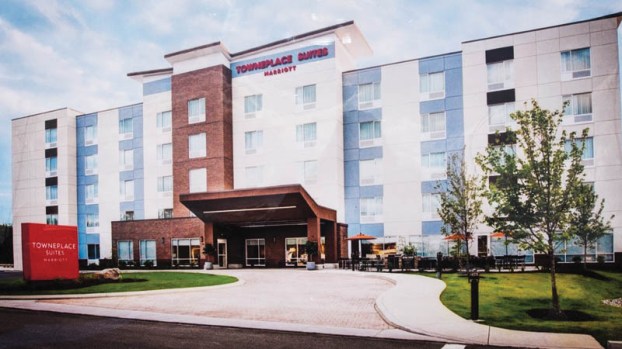 Image depicting the new Marriott Hotel to be built in Ironton.

New hotel to be built in Ironton

Towneplace Suites Marriott to be built in Gateway Centre

Ironton will see another hotel rise in the Gateway Centre.

On Tuesday, local officials and Mike Holtz, president of MPH Hotels, announced the construction of Towneplace Suites Marriott across the street from the Holiday Inn Express.

Holtz said that it was a $15 million project for the company and its investors, plus another $1 million from grants for infrastructure.

“We’re talking about a $16 million investment in Ironton,” he said. “That’s because we feel really good about what is happening here.”

He said that is double the amount they started with for the 79-room Holiday Inn Express when it was built three years ago.

The reason that the company is building a second hotel in Ironton is because of business.

“There is a lot of new industry coming into town. And we’ve been very impressed with the business at our existing hotel,” Holtz said. “It’s doing extremely well. And quite frankly, we are turning away a lot of business.”

The Towneplace Suites Marriott will be a five-story building with 109 rooms, an indoor pool and an exercise room. It is geared more toward long-term stays with bigger beds, full-size freezer and refrigerator, smart televisions and stovetop burners.

Ironton Mayor Katrina Keith said she was happy to make a positive announcement and how it will affect the community.

“It is always exciting to see new businesses come to our area, offering new employment opportunities to our residents,” she said.

The new hotel will create 30-35 permanent jobs plus about 200 jobs during the construction of the building.

She said it had truly been a pleasure working with organizations like the Lawrence Economic Development Corporation, the Ironton-Lawrence Community Action Organization, and the Lawrence County Port Authority.

“We are making great strides in Ironton and the Lawrence County region,” she said, adding that the Holiday Inn Express already brings in 150 people a day to the area who are buying goods in Ironton and that it is estimated that people pay about $348 into the local economy every day they stay in a hotel.

“This is a huge impact,” she said. “I want to thank you for believing in Ironton.”
Holtz said the construction of the Towneplace Suites Marriott could begin next year, once all the grants, approvals, and building permits are in place from the various agencies. He said they think construction will take 12-15 months.

He said there are many businesses that have been attracted to the area and that those business people will need a place to stay.

“We are really excited about this development,” Holtz said.

Ralph Kline, the assistant executive director of the Ironton-Lawrence CAO, said that the project was a public-private partnership.

“The city can’t do on its own and when the private sector comes in, they need public support,” he said, adding they would be seeking about $1 million in grants to do all the public infrastructure the building project needs. “We feel we have everything we need to put feet on the ground.”

Bill Pratt, the president of the Lawrence County Commission, said that the commissioners had known about the project for about two months.

He said economic development is like putting together a 500-piece puzzle and that it goes easy with more people involved.

“Even if you have all the pieces, all the people to put it together, and the picture but if you are missing one piece, you can’t get the puzzle together,” Pratt said. “That’s where Mike Holtz comes in, he had the last piece.”

“We are really proud of him and all the people that contributed to this project,” he said.