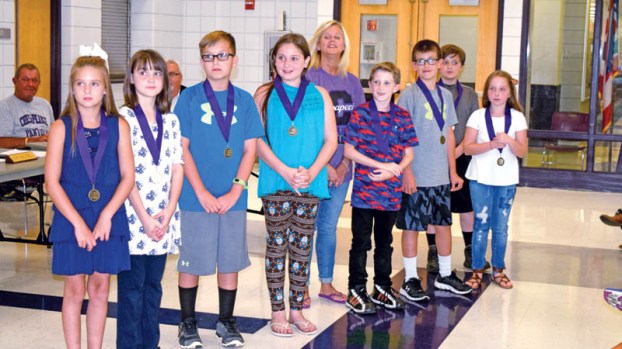 CHEAPEAKE — It is rare for a student to attain a perfect score on a state test, and when eight from the same school do so, it is quite a feat.

That was the case for Chesapeake Elementary, where eight third and fourth graders earned the highest possible score in last year state American Institute of Research (AIR) math testing.

On Monday, the school district honored those students with a ceremony at the monthly board of education meeting at Chesapeake Middle School.

Principal Trisha Harris and teachers Geneva Pemberton, Kerri Hall and Lisa Brooks called the students before the board and assembled crowd and presented them with medals for their accomplishment.

“This is the most fun part of the job,” Harris said. “I love the opportunity to recognize students for high achievement.”

Earning the highest possible score of 818 points in the third grade were Sophi Hutchison, Owen Murray, Breanna Scarberry and Brie Kelley, from Pemberton’s class. And earning the maximum of 835 points in the fourth grade were Jacob Harris, Jaden Roberts and Lucian Tille, from Hall’s class, and Noah Preston, from Brooks’ class.

“Panther Pride begins here and these are eight students we can all be proud of,” Harris said.

The board commended the students on their achievement and president Arthur Suiter pointed out that Harris’ school had now scored the highest on the test of all elementary schools in Lawrence County for three consecutive years, all during her tenure as principal.

“We are extremely proud of these students,” he said.

In other business, the board:

• Discussed the need to recruit more bus drivers, as needs for extracurricular events have stretched the current staff thin.

• Heard from Chesapeake Middle School principal Ty Johnson, who spoke of de-escalation training he and staff attended for high needs children. He said the school’s book fair is planned for the first week of October.

• Heard from Chesapeake High principal Chris Smith, who said the school’s homecoming game is scheduled for Sept. 29, and dance set for the Sept. 30.

• Heard from Harris, who noted that the school now has a Facebook page up and running, which includes photos of the recent grandparents ice cream social, which drew about 200 families.

New hotel to be built in Ironton

Towneplace Suites Marriott to be built in Gateway Centre Ironton will see another hotel rise in the Gateway Centre. On... read more