Payne’s road to college soccer takes her to Shawnee State 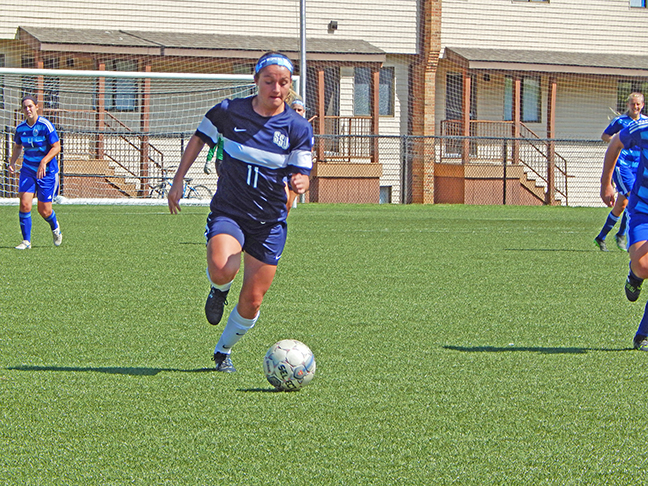 PORTSMOUTH — Sydney Payne’s theme song might be the Beatles “The Long and Winding Road.”
The former St. Joseph Female Flyers’ soccer standout always had a dream to play college soccer. Payne has achieved that dream but it has been a unique road reaching that goal.
Payne didn’t get any substantial offers after high school and elected to attend Morehead State where she began her studies toward a degree in elementary education.
But by the second semester the yearning to play again was too strong and she asked the women’s soccer coach for a tryout.
The coach was so impressed watching her tryout he immediately put her on the team.
The dream started to turn into a nightmare as she sat for virtually all the games. Payne then decided in the middle of her sophomore year to transfer to Shawnee State University and try to play for the Bears.
It was an educated move that could be graded out as an ‘A.’
The sophomore right wing not only earned a scholarship but has been in the starting lineup and rarely leaves the field.
“I had a goal and I wanted to reach it one way or another. Being at Morehead was hard but I didn’t want to give up on my goal. Here I am and I love it.”
Payne said the talent level at Morehead State and Shawnee State is very similar.
“They had some talent at Morehead. We have some girls who can play at the Division I level and so does Morehead. We just have fewer subs,” said Payne.
During her career at St. Joseph, Payne was a two-time first team all-district player and was a two-time second team All-Ohio selection.
With the talent and resume to match the players on the Morehead State roster, Payne found it difficult to sit and watch.
“It was really frustrating. I kind of walked on at Morehead so I was at a disadvantage. I kind of recruited myself and put myself in that position. To put all that time an effort and not get any results was frustrating,” said Payne.
“I saw an opening at Shawnee and it worked out. I love it.”
Payne also made the Dean’s List last semester and she said that the athletic program has been helping her prepare for studies.
“It’s taught me to plan. I get up at 5 a.m. for conditioning. It’s motivated me to do more,” said Payne.
For Payne, it sounds like the road to her dreams has been paved and the curves have been straightened out.

A girl reported missing from Lawrence County has been found. On Friday, a post from PL8PIC was going around the... read more