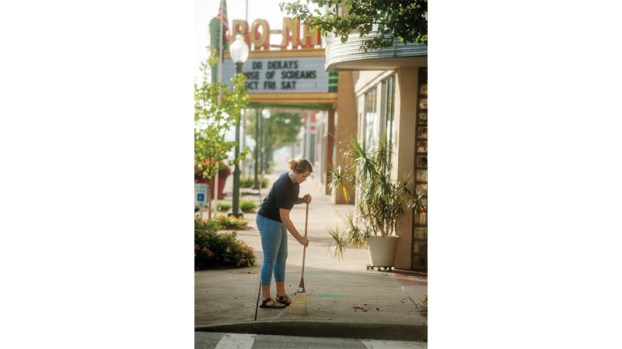 Ashlee Blankenship sweeps up in front of Unger’s Shoe Store early Saturday during the Clean Up Get Down event Saturday in Ironton.

Taking it to the streets

People took to the streets with brooms, dustpans, bags and other items on Saturday in Ironton to clean up the streets.

The Clean-Up, Get Down event took place, starting at 9 a.m., and people combed the area around Center Street, from the bridge to Fourth Street, working to brighten the city’s downtown.

Ginger Gillenwater, chair of Ironton aLive, said her organization helped organize the event after they were approached by Ironton resident Sarah Simmons about the possibility of such a project.

“She asked Mayor (Katrina) Keith about this doing this,” Gillenwater, who was running a table for the group at the Ironton Farmers Market, said.

In addition to the clean-up, she said there was rock painting and sidewalk chalk offered at the market and, after crews had worked through the day, they would return to the venue in the evening for a concert.

“We had 29 people show up, right off the bat,” she said of the clean-up effort, adding that more were expected to cycle through as the day progressed.

One of the groups taking part in the event was Girl Scout Troop 990, led by Melanie Kidd

“There are five of us – the three girls, another leader, and I,” she said. “We’re picking up trash and pulling weeds.”

A group of residents from STAR Community Justice Center was also hard at work, using equipment such as leaf blowers

“There are six residents here with me,” Billy Triplett, the center’s maintenance specialist, who was overseeing them, said. “They’re weed eating, cleaning the sidewalks and the streets.”

He said the group working on Saturday were all Ironton residents, and that the center has taken part in clean-up events before, usually sending residents into the communities they are from.

Saturday’s event was a volunteer effort focused on downtown, but Keith says a citywide clean-up will take place in the spring