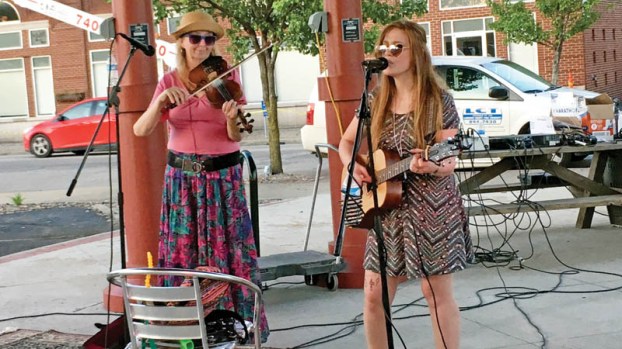 The Sugar Beats, of Portsmouth, perform at the concert wrapping up the Clean Up, Get Down event Saturday at the Ironton Farmers Market.

A concert, featuring four bands, took place in the evening at the Farmers Market, as the second part of the Clean Up, Get Down event.

Maclean James, of Ironton, one of the performers, is the brother of Sarah Simmons, a city resident who organized the event, which took place after volunteers spent several hours picking up trash and sweeping streets downtown.

“I’m a musician, and she included me,” he said. “She wanted to turn this from a normal clean-up into a party in the evening.”

He said the event was sponsored by Ironton aLive, with sound provided by the Chatroom Café across the street from the market.

“They’ve been coordinating with us, and we’ve been sending people there to eat,” he said.

In addition to James, the concert featured The Sugar Beats, an acoustic duo from Portsmouth, who performed songs such as Jewel’s “Who Will Save Your Soul?”

Also from Portsmouth was Nathan Marshall, while the show was concluded with the band Dingzui, who made a trip from Nashville to take part in the event.

“Their drummer was originally from Ashland, and when Sarah asked them, they immediately wanted to take part in the event,” James said.

Admission to the event was free and open to the public.