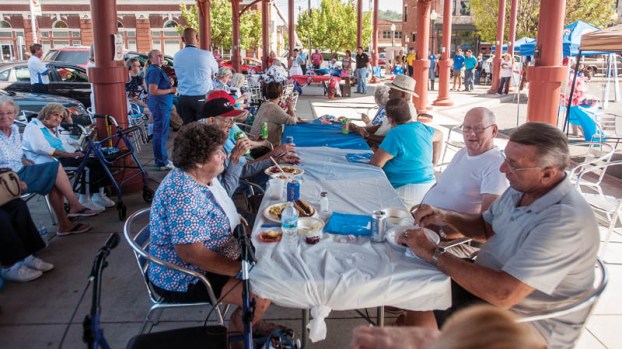 Seniors gather at the Ironton Farmers Market to take part in the senior expo on Wednesday in Ironton.

A crowd gathered at the Ironton Farmers Market on Wednesday as part of activities for seniors in the region and to raise funds for a good cause.

A senior expo took place under the shelter, with booths set up from local groups such as Abbot Home Health Care, the Lawrence County Health Department, Area Agency on Aging and others catering to the needs of the elderly.

The expo was organized by Kim Maynard, a nurse and community event coordinator at Abbott Home Health Care, who said she collaborated on the event with Melinda Nance, senior service coordinator for Ironton-Lawrence CAO.

“Basically, it’s to bring in organizations to provide information and services for seniors,” she said.

Attendees enjoyed an outdoor meal, while activities such as cornhole games were on hand.

Mike Patterson, clerk of courts for the county, helped to prepare beans in the kettle, while Kevin Meenach, of Abbot Home Health care and a pastor at Summit Baptist Church, gave the blessing.

Local politicians such as Ironton Mayor Katrina Keith, county commissioners and others were in attendance.

Keith honored veterans present and, along with Lawrence County Commissioner Deanna Holliday, read a proclamation for the occasion dedicating Wednesday as Giving Back to Veterans Day in Ironton and Lawrence County.

Richard Fisher, who works as a volunteer with the medical reserve corps of the health department, said his group was there to honor veterans.

“We’re trying to help,” he said. He said his booth was also focused on educating attendees about the benefits of “walking with two sticks.”

“It’s Nordic walking,” he said, noting that he has himself seen the health benefits of the exercise.

Following the meal, an auction took place, with donated items sold to raise funds for gift baskets to veterans.

Before bidding began, the national anthem was sung by Bobby Blanton, an RN at Abbot Home Health Care.

The basket effort was organized by Mariah Noel, a local nurse.

She said the baskets have been distributed at the veterans hospital in Barboursville, as well as one in Chillicothe.

Organizers said $1,532 was raised toward the effort from the auction, which was overseen by auctioneer Donnie Craft.

Events taking place at all locations Preschool age children celebrated the arrival of fall, despite the summer temperatures, at Toddler... read more