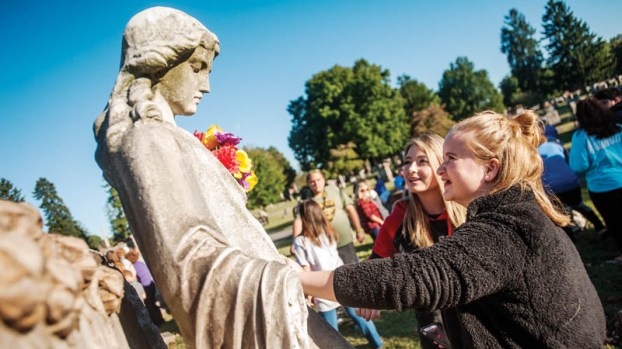 Fourteen-year-old Leah Bailey, front, seen with her friend Alexa Sites, 15, rub the belly statue of Osa Wilson during the start of the 2017 Historical Ghost Walk event Saturday at Woodland Cemetery.

The 20th year for the Woodland Cemetery Historical Ghost Walk may have been it’s biggest yet.

On Saturday, the shuttle buses kept busy bringing loads of people to Woodland Cemetery from the Vertiv parking lot, even as many people decided to walk instead of ride.

The 28 stations gathered crowds of people who listened to re-enactors tell the story of historic figures from Ironton and Lawrence County’s past.

Debbie Rogers, vice president of the Lawrence County Historical Society, has helped coordinate the event for about 15 years.

“Attendance is really good,” she said. “We’ve had several hundred people (in the first hour.) We estimated last year we had around 2,000.”

The event features such luminaries and events as ironmaster Nannie Kelly Wright, the unsolved murder of Dr. Joseph Lowrey, Col. William Lambert, and Martha “Lorena” Johnson, who was the subject of the song “Lorena,” which was beloved by the soldiers on both sides of the Civil War.

Rogers said she thinks that although the event isn’t really about Halloween and scares, a lot of people associate it with Halloween.

“We don’t advertise it as a ghost-scary walk, it’s a historical ghost walk,” she said. “But people really love it.”

This was Chuck Murnahan’s first time taking the walk and he was with Brandy Murnahan who had been three times before.

“I just came to see what it was all about,” Chuck Murnahan said. “I like it. I knew this happened,

I just didn’t know how it all came about. I just enjoyed the re-enactments.”

Brandy Murnahan said it’s taken a couple trips to make it through all the stations.

“I’m fascinated with Ironton history and the wealth and the traditions,” she said. “I regret we are no longer that way.”

Beth Neal, of Ironton, was escorting, her two daughters, Kellsey and Kenley, a cousin, Alli Frey, and members of Girl Scout Troop 990.

“They’re enjoying themselves. This is our first time,” she said. “It is interesting. There is a lot that happened in this town.”

Frey, of Portsmouth, was visiting her cousins and came along for the walk.

“It is so much fun learning about the history of the town,” she said. “I didn’t know it before. I liked the one about Osa Wilson, I liked the story of it.”

Cheyenne Kidd, of Ironton, was with the Girl Scout troop.

“I wanted to come out and learn about history,” she said. “I liked learning about the people that used to live here and what happened to them.”

Jim Hatfield drove from Cabell County, West Virginia with his two boys to attend the walk after seeing it on Facebook.

“We’d never been here before and wanted to come out and see it,” he said. “I’m impressed. It was very good. I’ll probably come back again.”