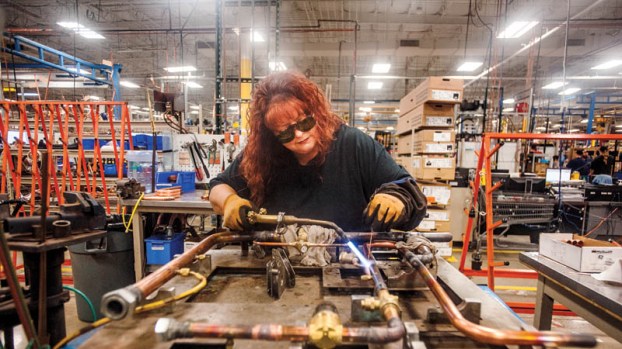 Wendy Tackett welds a pump refrigerant economizer during her shift at Vertiv. The company hosted a Manufacturing Day event Thursday.

Over 400 attend Manufacturing Day at Vertiv

There was a Manufacturing Day event held at Vertiv in Ironton on Thursday.

The focus this year was on women in manufacturing and the keynote speaker was Carolyn Mendel, the plant manager of General Mills in Wellston. The company makes Totino’s pizza and pizza rolls.

She talked about the journey women have had in manufacturing.

“Ultimately, we have to believe in their capabilities, because that is the limiter,” Mendel said. “When we provide the community and mentorship for them to be successful, then they can make key contributions.”

“Just as we needed them back then, maybe for a different reason, we need them today because I know as a plant manager, getting talent in my plant and keeping those positions filled is difficult,” Mendel said. “Women have to be a part of that answer.”

About 25 percent of the associates that work at Vertiv are women.

Jack Dingess, the plant manager at Vertiv, said they were happy to host the event.

“We are a part of the Greater Lawrence County Chamber of Commerce and we were honored by being their business of the year last year,” he said. “We have close relationship with them and they helped us expand in this area. So this was part of that partnership to celebrate manufacturing in this area. And it was a chance to show off what we do to the community.”

The event brought out 400 people to the plant including local dignitaries, Chamber members, and even members of the Boy Scouts who did a flag ceremony.

Vertiv builds, serves and designs the equipment for data centers, communications networks, communication networks and commercial and industrial facilities. In 2016, they had sales of $4.4 billion.

Bill Dingus, the executive director of the Lawrence County Economic Development Corp, said they were pleased to partner with Vertiv and sponsor the Manufacturing Day event.

“This country, this state, this region needs to return to manufacturing. And this is part of it, to engage families and others,” he said.

Dingus said after the door prizes were given out, he was talking to one of the Vertiv associates and asked her if she won anything.

“She said ‘No, but I’m the real winner because I work here,” Dingus said.

Ironton Mayor Katrina Keith said it was a fantastic event for the community.

The Ironton plant opened in 2000 as an Emerson Network Power facility. It adopted the Vertiv name when Emerson sold the Network Power business in 2016 and the company rebranded.

It currently employs about 375 people — an increase of approximately 125 since October of last year.

Machines have better success rate than manual method Lawrence County EMS has a new tool to help save lives. The... read more