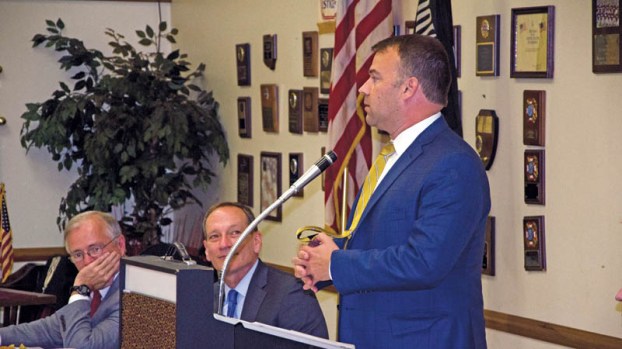 With Republican Donald Trump taking the state of Ohio and the U.S. presidency last year and statewide Democrats at a low, state chairman David Pepper said the party needs to learn from the mistakes of 2016 in order to bounce back in future elections.

Pepper was in Ironton Thursday to speak at the fall dinner of Lawrence County Democrats, which took place at the VFW Post 8850.

“We had better be fixing everything that went wrong with Ohio, if we want to win again,” he told the crowd.

Pepper said the pattern of 2016 went well beyond Ohio, with Republicans making gains over Democrats in rural areas.

Pepper said the party made the mistake in 2016 of focusing get-out-the-vote efforts on urban areas, even sending rural-area volunteers to urban areas.

“We need to engage rural voters,” he said. “We have to connect better all across the state.”

Pepper said there is historical precedence for the party to have a resurgence in the state. He pointed out that in 1980, Republican Ronald Reagan won Ohio by a larger margin than Trump, but in the 1982 mid-terms, Democrats had major successes in Ohio, re-electing U.S. Sen. Howard Metzenbaum, a stalwart liberal, and sending Richard Celeste to the governor’s mansion.

“We’ve been here before in Ohio,” Pepper said, stating that Ohio Democrats tend to do better when a Republican holds the White House, and vice versa.

But he said merely pinning its hopes on cyclical history will not turn things around for the party.

He said there is “no better year than 2018” for Democrats to make their case.

“Everything we care about is on the ballot,” he said, citing the party’s need to re-elect U.S. Sen. Sherrod Brown, as well as several open seats in statewide races.

Pepper said the party needs to make the case about Republican control that “the current method of governing in Ohio is not working.”

He called the condition of the state “appalling,” pointing to the opioid crisis, how he said the state is trailing in economic recovery and leads the nation in student debt.

“By any measure, Ohio is failing,” he said. “The conversation needs to be that the status quo is failing.”

One of the party’s statewide candidates for 2018 made an appearance at the dinner.

Former U.S. Rep. Zack Space, who is seeking to replace Republican David Yost as Ohio’s auditor, said he is running because “the democracy our flag stands for has been utterly compromised by special interests and money.” Yost is vacating the office to run for attorney general in 2018.

Space pointed to the controversy with the Electronic Classroom of Tomorrow, a community/charter school based out of Columbus.

“They have sucked up taxpayer money and they haven’t shown us their books,” Space said. “ECOT is missing millions.”

He said the school’s graduation rate of 40 percent was not acceptable.

“Imagine if your local school superintendent did that,” he said. “You would not tolerate that.”

Pepper and Space both said the party needs to reach out to Appalachian voters. Pepper said one method is to elect Democrats to local offices.

“If Democrats win at the local level, then people won’t just believe the things they hear about us on FOX News,” he said.

Ballard cited those wins, when called on to speak.

“We’re moving in the right direction, and putting the right people in office,” he told Pepper.

While Pepper’s speech was focused heavily on 2018, candidates for next month’s general election were recognized, with Mark McCown, who is running for Ironton Municipal Court, being called on to give the final speech of the night.

McCown said local Democrats have some contrasts with the national party.

“We have a very different take on the Democratic Party in Lawrence County than other parts of the country,” he said, noting that he is “pro-Second Amendment” and “a worship leader in my church.”

“But the one thing we’re adamant about is that we’re for the little guy,” McCown said, stating this applies to all socio-economic levels and races.

“That’s who we are, what we were raised as and that defines who we are as Democrats,” he said.

McCown said one of his goals, if elected, is to establish a certified drug court, and praised Ballard for his work on attempting the same, noting that the common pleas judge had filed paperwork with the state on the matter this week.

Other Democratic officeholders in attendance included Holliday, County Clerk of Courts Michael Patterson and Marie Hoover, a former Portsmouth municipal judge who was elected to the 4th District Court of Appeals in 2012.