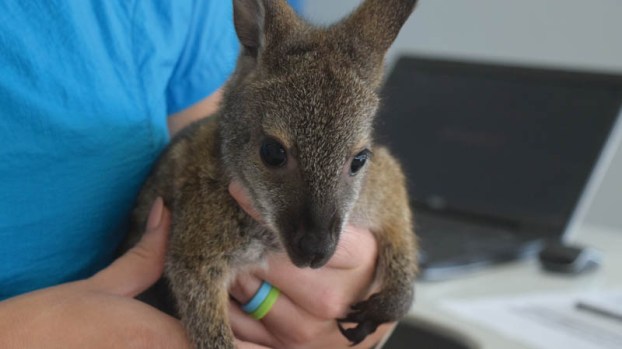 Wally, an eight-month-old wallaby, weighs four pounds and could grow to reach 30 pounds. Wallabies are a marsupial native to Australia and a cousin of the kangaroo. Kate Barker, who owns The Barker Shop pet grooming salon with her husband Tony, purchased Wally on Saturday.

One of animals planned for mobile petting zoo

Visitors to The Barker Shop in Ironton may encounter an unexpected sight.

Kate Barker and her husband, Tony, who run the business, recently purchased a wallaby, a marsupial cousin of the kangaroo and a native of Australia.

“We got him Saturday,” she said of the animal, which they have named Wally.

The couple, who have run the pet grooming salon since 2006, purchased Wally, who is about eight months old, from a breeder in Clarksville.

She said they are in the process of getting USDA approval to start a mobile petting zoo, tentatively set for spring. A license is needed to own the animals.

They have, on their farm in Pedro, llamas, alpacas, a zebu and a highlander cow, and have plans to purchase camels.

Wally is young and weighs four pounds now. Kate carries him into the room in a backpack with a pouch inside.

When he is full-grown, Kate says he will reach 30 pounds.

She said he is bottle-fed four times a day and uses use his long claws like hands to eat apples and sweet potatoes. She said wallaby and kangaroo food are also available to owners.

She describes his personality as “very sweet” and says he loves children.

“He loves my six-year-old son and follows him,” she said. “They play a lot. He’s very easy-going.”

Kate said she keeps him with her at all times, both at work and home.

“He really likes to stay in his pouch,” she said. “He goes wherever I go.”

Third year for car, artisan event The Ironton Heritage Festival returns to downtown Saturday. There will be a lot of... read more