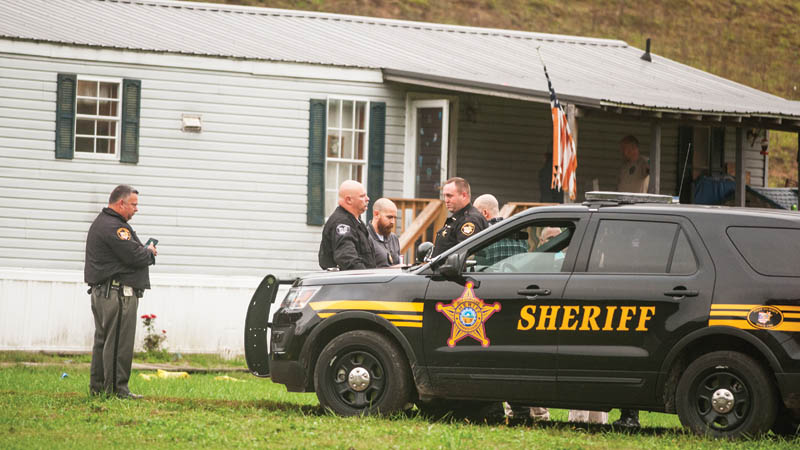 Lawrence County Sheriff’s deputies and members of the Ohio Bureau of Criminal Investigation stand outside a home located just before the 15 mile marker in Pedro following a quadruple homicide Thursday morning.

On Thursday afternoon, Lawrence County Sheriff Jeff Lawless spoke to the media about the quadruple homicide that happened on Wednesday near Decatur. He confirmed that three adults had been killed and that a boy they had been looking for overnight had been killed as well.

“What we have here is a horrible, horrible tragedy,” Lawless said. “We have many families who are suffering.”

On Thursday afternoon, warrants were issued for Aaron Lawson, 23, of 15868 State Route 93 in Pedro, who was described as 5’9″ in height, weighing 139 pounds and having brown hair and hazel eyes.

Lawless said three counts of murder and one count of aggravated murder had been filed with the prosecutor’s office.

“Further charges could be coming,” he added.

A fourth victim suffering stab wounds had gone to a nearby house for help and called the sheriff’s office. He was taken by helicopter to the hospital to have his injuries treated.

Lawless said that the man had been trying to get a hold of the relatives in the trailer and when he came home from work, he discovered the bodies and was attacked by Lawson and was stabbed several times. The man then drove to a nearby relative’s house for help.

Investigators searched the trailer for anyone else in the house while trying to not disturb the crime scene. Search warrants were obtained, and investigators from the Ohio Bureau of Investigation (BCI) found the body of 8-year-old Devin Holston, who had initially been reported missing. Officers had searched the woods and nearby structures in an effort to find him. The boy had also suffered gun shot wounds.

“His body was put in a place that was hidden,” Lawless said. “So that is what made it difficult for our investigators to discover it at that time.”

Lawless said they were not releasing the names of victims yet because they were still notifying next of kin. The boy’s name had been released as part of the effort to find him when they thought he was missing.

The bodies have been sent to the Montgomery County Coroner’s Office for autopsy.

Officers from various agencies have been searching the woods for Lawson.

There have been helicopters, drones and a bloodhound searching for Lawson.

Lawson was spotted by deputies on State Route 141, near County Road 52, driving a Blue Chevrolet truck at about 12:30 a.m. on Thursday morning and a pursuit ensued. Deputies said Lawson crashed the vehicle into a ditch on State Route 141 at County Road 44 South, fled on foot and he was lost in the woods.

He was last spotted in the 1500 block of County Road 181 on Thursday afternoon.

“That is a vast, wide open area. It is a strip mine area, a wooded area,” Lawless said. “There are caverns and caves everywhere, so it is difficult to search.”

Lawless said that they did not believe that Lawson was armed with a gun, but there had been reports of Lawson trying to get into cars overnight and could have found a weapon.

Lawless said they have recovered what they believe to be the murder weapon.

No motive has been given for the homicides. Lawless did say that Lawson was related to some of the victims and that he lived within a quarter mile of the house trailer where the homicides occurred.

“He did spend a lot of time there,” Lawless said, adding that the families and friends were dumbfounded this had happened. “It seemed like everyone got along, especially with the amount of time he spent there.”

Lawless said he hoped to find out the motive once they captured Lawson.

Lawless said that he searched the records and that Lawson had never been in the county jail. A search for Lawson’s name at the clerk of courts office came up with no results for any cases involving Lawson.

Lawless said that BCI was doing a methodical investigation of the house and that “every room is a crime scene.”

Rock Hill schools were closed Thursday because of the incident. Later in the day, all afters chool activities and games were cancelled as well.

Rock Hill, Dawson-Bryant and Symmes Valley schools, as well as Sugar Creek Christian Academy, are all closed today (Friday, Oct. 13). The Rock Hill football moms and Allyn’s Jewelers are taking donations to go toward funeral expenses for the family.