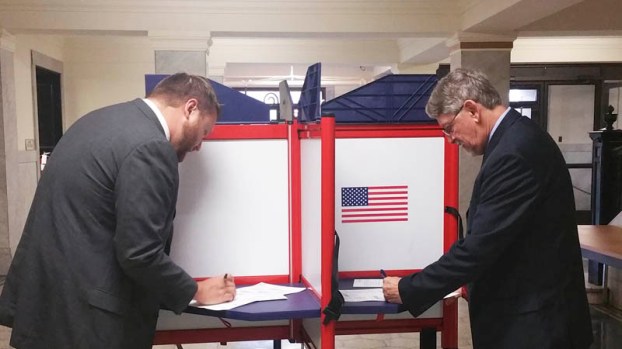 Lawrence County Board of Elections board members Randall Lambert and J.T. Holt were the first to cast ballots for the upcoming 2017 general election at the Lawrence County Courthouse. Wednesday morning was the first day for absentee voting.

Board members first in county to vote

As part of that, two members of the Lawrence County Board of Elections, Randall Lambert and J.T. Holt, were the first people to vote in the county.

It’s a tradition, said Toni Trosper, the deputy director of the Lawrence County Board of Elections, that the board members are the first to kick off voting for the November election.

“They came in at 8 a.m. and they voted the first two ballots,” she said, adding there had been seven or eight ballots cast by noon on Wednesday. “It’s been pretty good.”

So, now until Nov. 6, people can vote absentee, either at the Lawrence County Courthouse or by mail. Nov. 7 is the general election day.

“But we had a couple thousand dumped on us yesterday, but those are still be processed,” Tosper said. “It’s picking up.”

She added the ballots are mailed out to voters in the order they are received at the office.

“So the sooner we get the application, the sooner the voter will get their ballot,” Tosper said. “So, holding on to that absentee application any good. We need to get them.”

The last day for those mail ballots to be turned in at the office is Nov. 3.

She said that absentee voting it isn’t really voting early.

“It is still absentee voting, it’s not counted until Election Day,” Tosper said. “People come in and cast their votes and then we store the ballots in our vault until we count them on Election Day.”

The office’s web site is electionsonthe.net/oh/Lawrence, and you can go on there and all the election information is on there.

“It’s a pretty neat tool,” Tosper said. “A lot of people don’t know it is available.”

S.T.E.P.S. added Ironton location two months ago The S.T.E.P.S of Recovery Center had a gathering on Wednesday for its clients.... read more