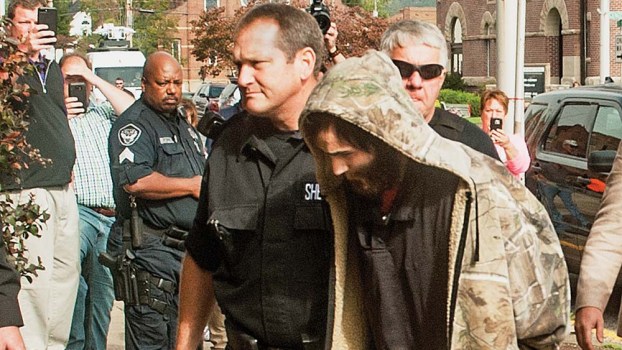 Aaron Lee Lawson, right, is escorted by Sheriff Jeff Lawless, left, into the Lawrence County Court House on Friday, following Lawson’s apprehension earlier in the day on County Road 52 around the 1700 block.

People cheered as accused quadruple murder Arron Lee Lawson, 23, of Pedro, was brought into the Lawrence County Courthouse on Friday morning after he spent two days hiding in the woods.

Tammie McGuire was Lawson’s cousin and he was a neighbor of Jackson.

Lawson was caught on County Road 52, after a tip from a citizen who lived on that road saw Lawson and got into contact with the Lawrence County Sheriff’s Office and the officer who was patrolling that area. Lawson did not flee and willingly gave himself up.

“He was ready and willing to give up,” Lawless said. “We had helicopters, aircraft, 4-wheelers, ATVs and massive, massive amount of manpower in that area. We had him contained and he couldn’t move too much. I think he was just plumb worn out from being in the elements.”

Lawson was dressed in jeans, a black shirt and an oversized camouflage hoodie and there was speculation by Lawless that he might have stolen the clothes from a vehicle or from a clothesline while he was on the run.

Lawless said that Lawson was a hunter who spent a lot of the time in the outdoors.

“He lived on MREs (Army issued meals ready to eat), he was the type of guy who could spend some time in the woods,” the sheriff said, he added no weapon was recovered from Lawson and he didn’t know where Lawson spent his time on the run.

A fourth victim, suffering stab wounds, had gone to a nearby house for help and called the sheriff’s office. He was taken by helicopter to the hospital to have his injuries treated.

Lawless said that the man had been trying to get a hold of the relatives in the trailer and when he came home from work, he discovered the bodies and was attacked by Lawson and was stabbed several times. The man then drove a quarter mile to a nearby relative’s house for help and was flown to a hospital for care. Lawless said the man was doing well.

Lawless said that as the investigation continues, additional charges could be filed against Lawson. Lawson is being held in the Lawrence County Jail, but Lawless said that he could be transferred to another jail if there were any issues. No date for an arraignment has been set as of Friday.

Lawless thanked both the many agencies that assisted and the public for calling in tips about a possible location of Lawson.

“And the outpouring of love for us has been tremendous,” he said, adding that people and businesses were dropping off food and water at a command station set up at the Upper Township Fire Department building. “I want to thank everybody.”

After a two-day manhunt, the man accused of four murders was arrested Friday morning.

Some 100 law officers had been hunting for Aaron Lawson, 23, of Pedro since Wednesday evening.

He was caught on County Road 52 after a tip from a citizen who lived on that road saw Lawson and got into contact with the Lawrence County Sheriff’s Office and the officer who was patrolling that area.

Lawson did not flee and willingly gave himself up.

Just after 11 a.m., Lawson was brought by Sheriff Jeff Lawless and deputies to the Lawrence County Courthouse to be interviewed by deputies. Members of the public cheered as Lawson, dressed in jeans, a black shirt and an oversized camouflage hoodie, was walked into the building under heavy security.

He has been charged with three counts of murder and one count of aggravated murder.

Lawson is accused of the murder of three adults and one 8-year-old boy, Devin Holston and stabbing an adult male on Wednesday at a house trailer at 15497 State Route 93 near Decatur Township on Wednesday afternoon.

During a press conference on the step of the courthouse, Sheriff Jeff Lawless identified the victims as husband and wife Donald McGuire, 50, and Tammie L. McGuire, 43, both of 15830 State Route 93, Pedro, Stacie M. Jackson, 28, and her son, Devin Holston, 8, of 15497 State Route 93, Pedro.

All four suffered from gunshot wounds and their bodies have been transported to the Montgomery County Coroner’s Office for autopsy.