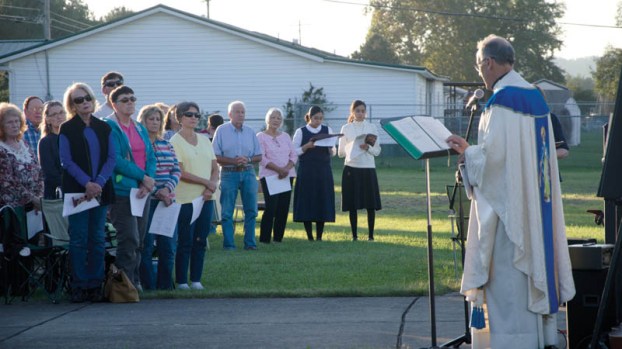 Father David Huffman, priest for the Ironton Catholic churches, conducts a mass at the Fatima shrine near Hanging Rock, to commemorate the 100th anniversary of the Fatima apparitions of Mary.

HANGING ROCK — Members of the region’s Catholic community gathered at the Fatima shrine on Friday for a mass to mark the 100th anniversary of the purported apparitions of Mary in Fatima, Portugal.

On Friday, it culminated at the shrine, located on old U.S. 52 outside Hanging Rock.

“We’re celebrating the 100th anniversary here today, with a mass, as we do every day,” Huffman said. “People are coming from all over the Tri-State. Many churches have made the shrine possible.”

Huffman told those present they had permission to take Communion a second time, as many had already been to mass earlier in the day.

Huffman said the shrine was built by Father Lou Phillips in the 1950s, who was the priest at St. Lawrence O’Toole Church, after he was inspired by visiting the Fatima shrine in Portugal.

He said after Phillips left the Lawrence-Scioto area, he would have troops of Boy Scouts maintain the shrine until his death in 1980. While maintenance had fallen off for some time, Huffman said in the last decade or so, the Knights of Columbus and others have kept up the grounds and restored it.

The shrine, dedicated in 1954, was built on land donated by Jim and Jenny Riley. Mrs. Riley, who is now in her nineties, still lives near the site, Huffman said.

According to church traditions, three shepherd children at the Cova da Iriam, beginning in the spring, reported the appearance of an angel, followed by the Virgin Mary, whom they described as “the Lady more brilliant than the sun.”

The children said Mary appeared to them for six consecutive months, each time on the 13th, asking them to say the rosary every day to bring peace to the world, and to offer up prayers and sacrifices for the conversion of sinners.

The reported apparitions continued until Oct. 13, 1917, which became known as “the Miracle of the Sun,” n which thousands said they saw the sun “dance in the sky.”

“It was the biggest miracle since the Resurrection,” Huffman said.
Sister Brigid Callan, of the Diocese of Steubenville, spoke of the importance of Fatima to Catholics.

“Our Blessed Mother is the mother of Christ,” she said. “While we don’t worship her, we do honor her, for she is Christ’s mother. She has had many apparitions on earth, and during all of them, she points to her son. The apparitions at Fatima are very important, because she guided us to return to her son.”

She said during the appearance, at the height of World War I, Mary asked people to pray for peace.

Huffman said Ironton Catholic churches, as well as Pine Grove, Portsmouth and Wheelersburg all visit the shrine and work to maintain it.

ROME TOWNSHIP — The community is invited to a safe Trick or Treat event at the Wyngate at RiversEdge in... read more