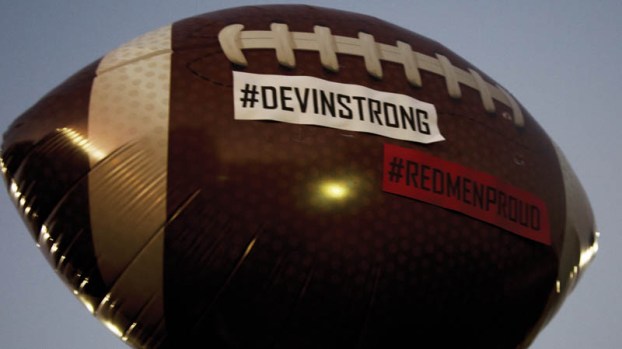 As Rock Hill deals with the aftermath of last week’s quadruple murders in Decatur Township, schools across the region set aside their athletic rivalry and showed their solidarity and support for the community impacted by the tragedy.

A fundraising effort took place at the Ironton-Coal Grove game on Friday night, with donations collected to help pay for funeral expenses for the family.

At Fairland High School, all players wore a heart decal on their helmets during Friday’s game to honor the family lost, athletic director Jeff Gorby said.

A table was set up by the school’s student council to collect donations, he said.
Gorby said the idea for the drive came from student council member Montana Runnels, who approached him. He said the council, led by Tara Samson, handled the effort.

In total, Gorby said $376 was raised at the Fairland game. Gorby said the money will be given to Sam Gue, assistant principal for Rock Hill to get to the family.

On Friday, a memorial balloon launch took place at Rock Hill High School, filling the sky with a sea of the school’s colors of red and white and, just across the Jackson County line, Oak Hill High expressed their solidarity by doing the same.

“She and I both have family down there and it really hit home with us,” Snyder said. “She wanted to get the school color balloons and have our players let them go and do a moment of silence for them. Our heart breaks for them. I have people close to me that were close to the victims, so I see the pain. We just wanted to do something to let them know they was on our minds In Oak Hill.”

Mass marks 100 years since visions at Fatima HANGING ROCK — Members of the region’s Catholic community gathered at the... read more