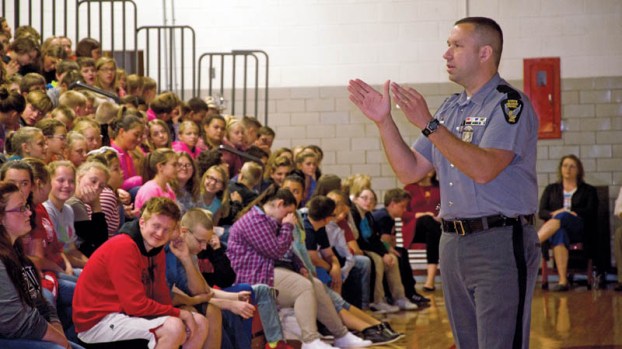 WILLOW WOOD — High school and junior high students at Symmes Valley gathered on Monday to listen to a panel of speakers discuss issues of drugs, alcohol and addiction.

Henderson, who works for the drug treatment program, shared her own story of addiction and recovery with the students.

“I started using at about 14 years old,” she said. “Before I knew it, I was lying and stealing from my family. The only goal was to get what I wanted.”

She said that painkillers do not “kill pain,” but instead fool the brain so that it can not process pain. She also warned students of heroin, noting that the drug is often mixed with other substances, such as Fentanyl.

“Most people who use heroin don’t know what they’re getting,” she said. “You can’t trust a dope dealer. They just want your money.”

Henderson said one thing that helped her in her recovery was a residential program, like the sober living home run by Riverside.

“I went through a lot of rehab to get where I am,” she said. “But I wouldn’t wish that on anyone.”

Craft said the group was there for a more important reason than drugs.

“We’re here for you,” he said. “You matter. Everyone in this room matters — your teachers, the staff. Not only do you matter, you are powerful. You are unique.”

He said the key for someone facing a situation that may lead to addiction is to change their environment.

“Find someone in your life who can guide you — a family member, a teacher,” Craft said.

Surround yourself with good people. Reach out of your environment if you’re not healthy or safe.”

He said many turn to the drugs as a way to ease the pain in their lives.

“Don’t look for the easy way out,” he said. “When life knocks you down, fall on your back. If you do, you’re still looking up.”

The panel took questions from students, one of who asked what is the best way to help someone facing addiction.

“Ballard said in most cases, the people he sees in his courtroom “lack support.”

“They don’t have someone after years of being in abusive homes,” he said. “Most people who come to see me wouldn’t have, if someone had reached out to them.”

He said the key is also to focus on treatment instead of merely sentencing people to prison.

“You know the end result of just putting people in jail,” he said. We’ve seen those results for decades. We need to show people that they matter so that, finally, something clicks for someone to care for them so that they have self worth.”

He said the system has to be modified “because we a re in crisis mode.”

Ballard said the panel had come before the students, seeing them as the future of the community.

“You, the youth of the community, need to lead the charge,” he said of refusing drugs. “That’s why we’re coming to you. You’re the future of Lawrence County, southern Ohio and everywhere you will go.”

Author J.R. Johnson will be at the Briggs Lawrence County Library Ironton branch Saturday for a book signing of his... read more