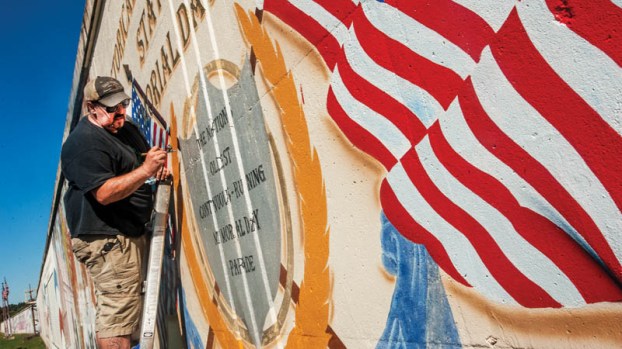 The Ironton-Lawrence County Memorial Day Parade mural is being renovated.

On Tuesday, Tracy McKenzie, owner of Xtreme Kustom Paint of South Point, was putting the finishing touches on the floodwall mural. It was originally painted by Patty Shively in 2006 and had faded because of sunlight and the elements.

“It was in very bad shape,” McKenzie said. “Paint technology has changed a lot since 2006.”

McKenzie has a background in automotive painting and is actually using the same paints that are used on oil tankers.

“I’m using a urethane enamel paint, that’s why it has a nice gloss to it already as compared to flat finish,” he said, adding that it is a lot tougher and will retain its bright colors longer. “I also put an ultra violet clear coat over it to protect it from the sun beating it to death.”

The art is exactly the same, “all I did was clean it up,” McKenzie said. “I scrubbed the wall and went over exactly what Patty did in ’06. There are some minor changes because I have an airbrush; I’m doing some shading. Patty did good work, it is just that the weather did a number on it.”

McKenzie said he believes the new paint will last longer this time.

“I’m hoping for a good 20 plus years, honestly,” he said. “It’s the same paint they use on tractor trailers and at the oil refinery. It will last a good long time.”

He said Sherwin-Williams donated the paint and the Ironton Lions Club and Lou Pyles, the Ironton-Lawrence County Memorial Day Parade organizer, contracted McKenzie to do the renovation.

“I donated the labor, they donated all the paint materials I needed to paint with,” he said.

While his stock in trade is painting custom motorcycles and other vehicles, murals are a natural extension of his trade since he does murals and other types of art on bikes.

“I do a lot of painting that isn’t on a bike,” he said. “Signs, T-shirts, whatever I’m interested in.”
McKenzie hopes that this will get the ball rolling on getting some of the other murals on the floodwall renovated.

“With the paint that is available now, it could really be something again,” he said.
McKenzie said he is also in talks to touch up some of the older murals in Ashland, Kentucky.