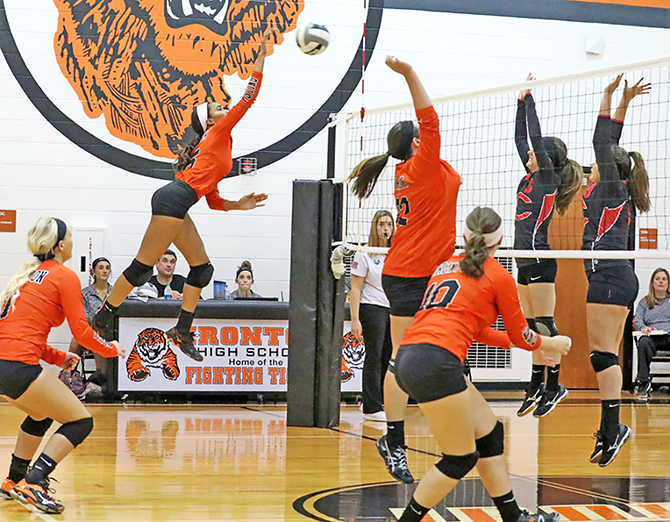 The game was up and down. A lot like the emotions of Lexi Wise.
The Ironton Lady Fighting Tigers won the first two sets of their Ohio Valley Conference volleyball game against the Coal Grove Lady Hornets only to escape with a five-set win on Monday.
Ironton jumped out and won the first two sets 25-8 and 25-22. Coal Grove bounced back and won the next two sets 27-25 and 25-23 to set up the tiebreaker. Ironton regrouped to win the set 15-4 and the game.
Lady Fighting Tigers’ senior Lexi Wise was honored for recording her 1,000th career kill last week at Rock Hill. Wise is the first Ironton player with 1,000 kills.
“I found out about four games ago (she was near the record) and I’m not going to lie. I was a long way from it and I didn’t think I was going to get it. Honestly, I thought I’d get it in a tournament game,” said Wise.
“It was just amazing. The moment is something I’ll remember forever. Definitely setting a school record is something that feels pretty good.”
Wise began playing volleyball in the sixth grade but she also plays basketball and runs track. Wise has been a standout on the basketball team and helped Ironton to the state tournament as a sophomore.
“Volleyball means a lot to me. At first I just played it to be with my sister who played in high school. Now I practice it a lot,” said Wise.
“Basketball is my favorite and I work on it a lot more. But I’m really going to miss volleyball now.”
Wise is hoping a college basketball offer will surface, but her success and growing love of volleyball could present a problem if a volleyball offer is put on the table.
“That would be a really hard choice. I’m not going to lie. Here lately I’ve been deciding if I want to do volleyball or basketball. It definitely would be something I’d thing about because I’m definitely going to miss volleyball,” said Wise.
The Ironton jayvees won in two sets, 25-23, 25-17.
Ironton will host Minford at 4 p.m. on Saturday in the Division III sectional tournament.
Coal Grove entertains Oak Hill at 6 p.m. Tuesday in the Div. III sectional with the winner advancing to play at Wheelersburg in the sectional finals at 4 p.m. Saturday.