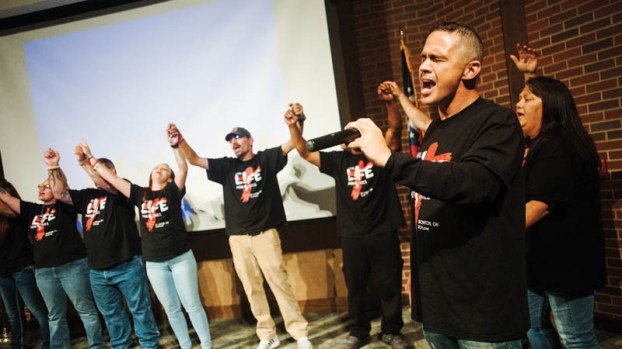 Members of Real Life Ministries get the crowd warmed up Tuesday evening before the domestic violence awareness event.

“We gather here today to celebrate those people who fight the good fight and choose to help each other,” Pastor Eric Barnes, of First Baptist Church in Ironton, said during the opening prayer.

The night raises awareness of domestic violence and highlights the mission of the task force’s shelter in Lawrence County.

“A lot of people said they didn’t know Lawrence County had a domestic violence shelter,” Elaine Payne, the director of the task force, said. “We’ve been in existence since 1988. We take care of domestic violence survivors, shelter them and help get them on their feet.”

Payne thanked each of the staff of the shelter who were present.

“The shelter is such a viable agency in Lawrence County. Our staff, they work hard and some are on call all night.”

Lawrence County commissioners Bill Pratt and DeAnna Holliday were in attendance and Pratt presented Payne with a $1,000 donation by the commission.

“This is not the commission’s money,” Pratt, who said he’s been friends with Payne for 20 years, said. “It comes from the taxpayers of Lawrence County. We like to help people who help themselves, and, my goodness, there’s not a better group than this.”

He presented Payne with a proclamation from the commission, naming October as Domestic Violence Awareness Month in Lawrence County.

“I can’t think of a stronger cause than what this is tonight,” Pratt said. “I have three daughters and I know a father can’t always be there. I am so grateful for this organization.”

Ray Salyers, of Dynegy, also presented a donation from his company, which he said has worked with the task force for none years.

“We are blessed with this organization and what you do in the community,” he said.

A donation was also made from the child welfare club, presented by Debbie Jones.

She served as the keynote speaker for the evening.

“What she does behind the scenes is amazing,” Keith said of Payne’s work.

Keith spoke of her own history of dealing with domestic violence.

“I can stand here today and tell you that I have overcome it,” she said. “I’ve walked this path. It’s hard to get the courage to leave when you think you’ll have nothing.”

She said the shelter offers survivors a chance.

“They can take that stepping stone, build on it and walk toward their destiny,” Keith said. “Thank you for what you do.”

Keith said, in discussing domestic violence, the conversation needs to shift from “victims” to “victors.”

“I believe in leading a victorious life,” she said. “We can not continue to think of ourselves as victims. It does not define who we are. We should continue pushing on.”

She said people must have a “burning desire to succeed.”

Following the speeches a reception and a balloon launch, I memory of those who lost their lives to domestic violence, took place.

“This is the reason we have this every year,” Payne said. “It is to arouse people so that they know this problem exists.”

Ironton City Council will meet tonight after a week’s delay because of the manhunt that was going on for the... read more