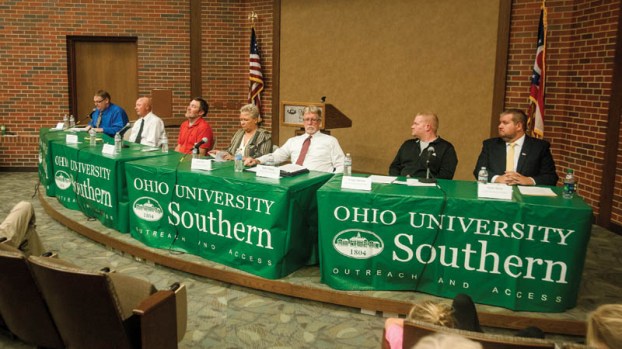 Six of the seven Ironton City Council candidates participated in a political forum Tuesday evening at Ohio University Southern. The event was hosted by The Tribune and the university.

Six of the seven candidates running for Ironton City Council made their pitch to voters at a forum on Tuesday night.

Incumbents Craig Harvey, Bob Cleary, Beth Rist and Jim Tordiff appeared, along with newcomers Brad Lowe and Nate Kline at the event, sponsored by The Tribune and Ohio University Southern.

Shala Black was not in attendance.

Issues dominating the discussion included the need for jobs, keeping youth in the area, budget concerns and fee increases.

The group all agreed that the topics were interrelated.

Harvey, who serves as vice mayor, said his focus in seeking another term is “still is the future of Ironton.”

He said his concern is rooted in raising a family in the city.

He described himself as “anti-fee” and said while funding is needed for police and firefighters,  “there are other sources of revenue.”

He stated that Ironton’s water is still “the cheapest in the Tri-State” and said the bill also covers utilities, which were included to save funds on postage for separate bills.

Cleary, a former mayor, touted his ownership of two local businesses and time in public office, work with government and civic groups.

As one of his accomplishments, he cited working as mayor to bring Liebert to the city, taking the building used by Cabletron before they left the area.

Cleary said that council has looked at what can be done to lower water and utility bills and said an increase in the income tax has been considered as a revenue source.

On industry, he said facilities need to be built, and said one of the main reasons Liebert came to the city was because of the existing building.

Rist, who has served for eight years on council and as an officer with the city’s police department for 13 years, emphasized she is “not for any raise in fees.”

“I’m on a fixed income myself, and I understand,” she said.

She said she has enjoyed her time in public service.

“I try to listen to everybody’s problems and not to judge,” she said.

Tordiff, a former mayor and city finance director, who was appointed to council to fill a vacancy, is seeking election to a full term.

Like Cleary, he said he wants to work with the Lawrence County Economic Development Corporation to court industry for the city.

“I think it’s time Ironton gets its fair share,” he said of LEDC funds. “I want to pursue cooperation with LEDC to put Ironton as a priority for jobs,” he said.

In addition to industry, he said Mayor Katrina Keith and council are also exploring the possibility of bringing a sports complex to the city.

One issue he said he wants to address is the reciprocity clause on local income taxes, to put an end to a situation where a person lives in Ironton, but pays an income tax in another city where they work.

“You should pay one, not two taxes,” he said.

Lowe, who is making his first run for public office, cited his four years in the U.S. Army and 15 years in Pipefitters Local 577.

He said he was raised by his dad, working in a garage.

“I’ve always been a working man, I think that might be a benefit,” he said, noting that his experience could give him a better understanding of things such as the water system. “I would look at things from a different angle.”

Lowe said the city is in need of revenue and that will not change without more jobs. He said “small town America” is in decline and that the city must study ways to adapt.

“The business-scape has changed,” he said. “It’s become more technological.”

He also echoed the need for newer facilities to attract business.

Kline, who teaches personal finance/business in Portsmouth schools, comes from a background in accounting.

He said his expertise could help the city on financial matters.

“Having so many family and friends in the community, I felt it was my duty to step up, serve and make it a better place for the future,” he said.

Kline said the city has momentum going its way, which he would like to continue. He said his goals are improving infrastructure and increased transparency in government.

One method of transparency he would like to implement is by having the city sign up for the Ohio Checkbook with the state treasurer’s office, which would record transactions online.

“It’s a great tool and would be something to discuss,” he said.

Voters will choose to elect four members to council in the general election, set for Nov. 7.