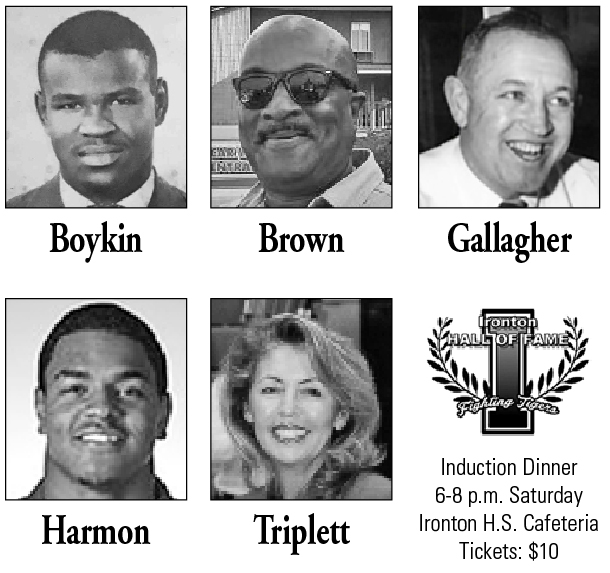 The fourth Ironton High School Athletic Hall of Fame class will be inducted on Saturday at 6 p.m. The new inductees will be introduced at Friday’s game when Ironton hosts Portsmouth. Here is the class:
Rick Boykin – Considered the greatest running back in Ironton history, Rick “Meat” Boykin graduated in 1948 and agreed to play at Indiana University. However, Indiana coach Bo McMillian was hired as the head coach of the Detroit Lions and took Boykin directly to the Lions. Unfortunately, Boykin suffered a knee injury that prematurely ended his career. Besides football, Boykin also played basketball and baseball and later played professional softball.
Dick Gallagher – Gallagher coached at Pedro and Ironton high schools. He guided Ironton to its first unbeaten season in 1935, coaching quarterback George McAfee who later was selected to the Pro Football Hall of Fame. Gallagher served as McAfee’s presenter.
A three-sport start at Kentucky Wesleyan, Gallagher went on to be the head coach at William & Mary and was the head coach at Santa Clara in 1949. He served as an assistant coach for the Cleveland Browns under head coach Paul Brown on two separate occasions and also coached the Chicago Cardinals.
Gallgher was the Buffalo Bills general manager for six year and then took a job as a scout with the San Francisco 49ers. He was with the 49ers less than a year, leaving in 1968 to take the job as the director of the Pro Football Hall of Fame. He retired in 1976.
Mike Brown – A 1977 graduate, Brown was a four-sport standout for the Fighting Tigers.
He was a four-year starter in baseball, a three-year starter in basketball and a two-year starter at quarterback in football and ran track his senior year while also playing baseball.
He was first team All-SEOAL in three football, basketball and baseball and as the point guard Brown — a.k.a. Silky Smooth — helped the basketball team to the Class AA regional championship game in 1977.
In baseball, Brown was an outstanding shortstop who was named to the North/South All-Star Game.
Lauren Triplett-Schweickart – A 1981 graduate, Triplett-Schweickart was a two-sport standout for the Lady Fighting Tigers in basketball and softball.
She made her mark in basketball as a four-year starter who helped Ironton to three regional tournaments and the school’s first-ever state tournament team in 1980.
An All-Ohio second team selection in 1981 as a senior, Triplett-Schweickart is second on the girls’ all-time scoring list with 1,386 points. She held the record until 2016 when the mark was broken by Lexie Barrier.
Triplett-Schweickart was a four-year starter in softball as the team’s shortstop.
Jason Harmon – Harmon is a 2000 graduate of Ironton High School where he was a three-sport standout in football, basketball and track.
Harmon was a three-time All-Ohio selection in football. He was second team as a sophomore and junior and first team as a senior. He was the Southeast Ohio Defensive Player of the Year as a junior and the Offensive Player of the Year as a senior.
Harmon helped Ironton to three straight playoff appearances including a state runner-up in 1999.
Harmon signed with Michigan State where he was a three-year starter and led the team in tackles in once and was fourth in another season while playing strong safety.
He was signed by the Chicago Bears before being released in the final cut. He then played in the Arena Football League.

CINCINNATI (AP) — The traditional Reds opening day parade has been moved to the fourth game of the season because... read more