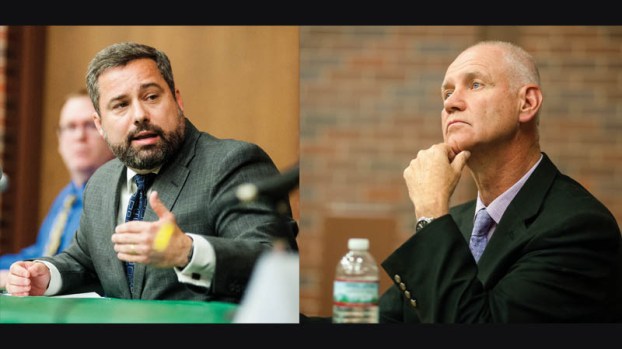 Ironton Municipal Court judge candidates Mark McCown, left, and Kevin Waldo at a political forum Tuesday evening at Ohio University Southern. The event was hosted by The Tribune and the university.

The two men vying for the position of Ironton Municipal Court judge stated the case for their candidacy at a forum at Ohio University Southern on Tuesday.

Ironton councilman and assistant county prosecutor Kevin Waldo and attorney Mark McCown appeared at the event, sponsored by The Tribune and the university. The two are running for the seat held by O. Clark Collins Jr., who is barred from running again due to mandatory retirement age.

Waldo cited his resume, which includes 38 years as an attorney and 30 years with the prosecutor’s office.

“I feel I have a lot of experience, ability and time invested in this profession,” he said. “I want to do the best job I can. I want you to have trust in me.”

McCown shared his vision for the position.

“This election is about our future,” he said. “It’s not about me or my opponent. It’s about you and who you want to take the court into the future.”

The candidates were asked whether they thought the war on drugs has been a success or failure.

Waldo pointed to work of leaders in the community, such as Common Pleas Judge Andy Ballard and Prosecutor Brigham Anderson, who he said have been leading the fight against the opioid crisis.

“We’ve got leaders in the community, pursuing it with absolute diligence that we haven’t seen in years,” he said.

He said the root of the problem needs to be addressed.

“Not only are we seeing defendants come before the court, we don’t see the social problem,” he said, stating many may have lost their jobs and family.

He said compassion and a focus on rehabilitation and education is needed.

McCown said, “up until now, the war on drugs has been an absolute failure.”

“We see this in our communities, with the opioid epidemic and with meth and heroin,” he said.

He said strides are being made and said a certified drug court is “absolutely and adamantly needed.”

The issue of the court was one of the few areas of disagreement between the candidates. Both are in favor of a drug court, though McCown insists it must be certified by the Supreme Court, while Waldo favors what he describes as “a fully operational court.”

The candidates also spoke about changes they wanted to bring to the court.

McCown focused on the idea of transparency efforts, such as putting court dockets online and having video screens to scroll cases in the courthouse.

He said he also wants to make the courtroom more handicapped accessible, and to create a separate waiting room for victims.

“If my wife were assaulted, she would have to sit an hour and a half with the person staring at her,” he said of the current situation. “That can’t happen.”

Waldo said his goal is to restore trust in the court.

“When I knock on doors or have encounters with folks, I get the sense that there’s a basic mistrust or loss of faith in our court system, especially the Ironton Municipal Court” he said, adding that his opponent shares his concern. “I want to restore faith and trust in the court and make sure it’s accountable to the public.”

Art exhibit on display at library through Nov. 30