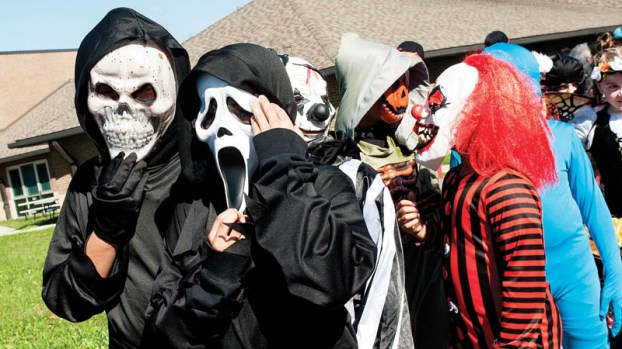 The“Scream”killer and the Grim Reaper and creepy clowns make their way through the annual Burlington Elementary School Halloween Parade Friday.

At South Point, police closed down the block surrounding the school, so that children could march and floats could pass by the crowds of parents and neighbors lining the streets.

A hay wagon carried the primary students of the month, while AR students manned their own float.

The grand marshal for the parade was Owen Tabor, while Urijah Gardner and Zach Nelson served as honorary grand marshals.

Also taking part in the event was the El Hasa Shriner Hillbilly Clan 1, Outhouse 8, who showed up with their novelty vehicles.

A fundraiser took place in all of the school’s classes, with the winner, Mrs. Bazell’s second grade class, getting to walk with the Shriners as “honorary hillbillies.”

“They raised almost $600,” Roger Morgan, secretary for the Shriners, said of the school’s efforts.

He said similar fundraising has taken place at Rock Hill and they hope to get more schools involved in the effor. All proceeds go to pay for transportation for children to the Shriners hospitals.

Burlington Elementary’s parade took place on the school’s campus, kicking off with principal Michael Clay, dressed as a giant baby and accompanied Thing 1 and Thing 2 from Dr. Seuss’ “The Cat in the Cat.”

The three led all of the school’s students around the building for three circles, showing off their costumes for the assembled parents.

Following the parade, the school hosted a Halloween party for the students.

SOUTH POINT — The public is invited to come and watch the Halloween parade at South Point Elementary on Friday.... read more