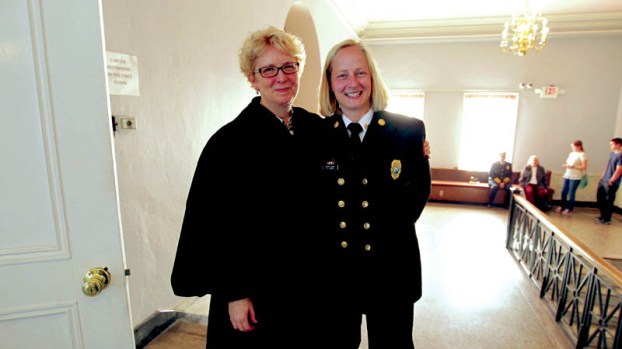 Cabell Huntington drug court Judge Patricia Keller and Huntington Fire Department Chief Jan Rader are two of the three women featured in the Netflix documentary, Heroin(e), which shows how Huntington is dealing with the opioid crisis. Rader was on “Meet The Press” on Sunday morning.

Huntington fire chief Jan Rader appeared on NBC’s “Meet the Press” on Sunday to discuss the drug epidemic in the Tri-State region.

Rader, an Ironton native, was invited on due to her appearance in the documentary “Heroin(e),” which was released this fall.

Host Chuck Todd asked Rader to detail a typical day on the job in Huntington.

“It usually starts out slow, which is nice,” Rader said. “But 26 percent of the time that my guys get a call and they climb on a fire truck, they’re going to an overdose.”

Todd asked Rader how often the crew goes out to fight a fire.

“Less than 9 percent of the time right now,” Rader said, noting that it has been years since they have had a day without an overdose in the city. “And 10 percent of that time, it’s a death. And it’s not just a death. It’s a death of a young person. It’s a very negative experience for everybody involved — the first responders, the person who overdoses and the family of the person who overdoses. Probably about 50 percent of the time, we have children involved either watching or in the lives of the people who overdose.”

She said those addicted to heroin did not start on the drug.

She said, once hooked, addicts are “trying not to be dope sick.”

“Being dope sick is like the flu, times ten — excessive vomiting, diarrhea,” she said. “They spike a fever, and they have severe abdominal cramping. So that’s what they’re trying to prevent.”

Todd asked Rader, what she would request if she had an audience with President Donald Trump, who declared the opiate epidemic a national emergency last week.

“First off, I need an unlimited supply of NARCAN, because I have to keep people alive before I can get them long-term treatment,” Rader said. “I would ask for medically assisted detox. And I would certainly ask for more treatment beds.”

Rader said there has been success in people overcoming addiction.

“What gives me hope, we have plenty of people in our town that are in long-term recovery,” she said. “And they are healthy, happy, tax-paying citizens. And it has worked. People do recover. And I feel like we do need to focus on the positives that we are experiencing daily.”

Rader, an Ironton High and Ohio University Southern graduate, is a 22-veteran of the department. She was named as chief in March after an interim stint, and is the first female fire chief for a professional fire department in West Virginia.