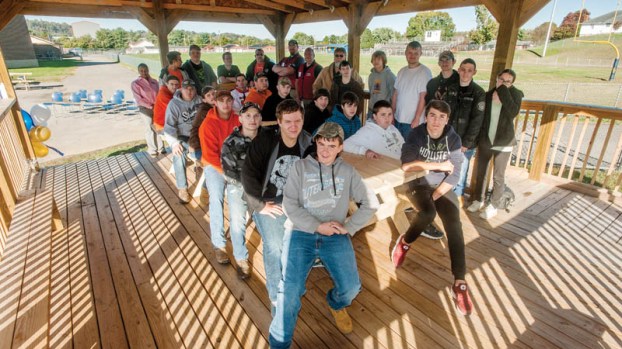 Community volunteers and supporters are seen inside the new reading pavilion located at South Point Elementary School during a special dedication.

SOUTH POINT — South Point Elementary dedicated its new reading pavilion on Friday and gave thanks to the community members who helped make it possible.

A ceremony took place at the school in the morning and, following opening remarks by principal Chris Mathes, the fourth grade chorus, directed by Jill Young, sang “God Bless America.”

Then, those who contributed to the effort were introduced.

“I’ve never built anything before,” Christian said, and stated Wurtzler put him in touch with Jordan Gann, a project specialist at the store, who was able to help him put together a design.

Gann then helped get the school in touch with Shield Roofing, who contributed to the building.

“It was a networking thing,” Christian said. “One person led to another.”

The pavilion was constructed in May, with delivery of materials provided free by Lowe’s.

Drew Gibson, of Superior Handyman and Remodeling, volunteered to oversee construction of the pavilion, while students from Collins Career Technical Center provided labor.

All were on hand for Friday’s dedication.

In addition to the pavilion, a “buddy bench” has also been installed nearby, paid for by Girl Scout Troop 7497 of Proctorville, who have raised funds for them at several schools.

The ribbon for the pavilion was cut by students Mackenzie Spaulding and Zoe Kinder.

Kinder recently won the school’s spelling bee, while Spaulding returned to school, following 10 weeks off for his surgery and recuperation.

Wurtzler said he and those at the store were happy to help.

“It’s a really good opportunity for us to give back to the community,” he said. “We like to be able to do that and this is a really good grant program.”

Wurtzler said, following South Point’s success, the nearby Burlington Elementary School has applied to build a reading pavilion, too, and that construction project is set for spring.

Portman says he is focused on working with Trump