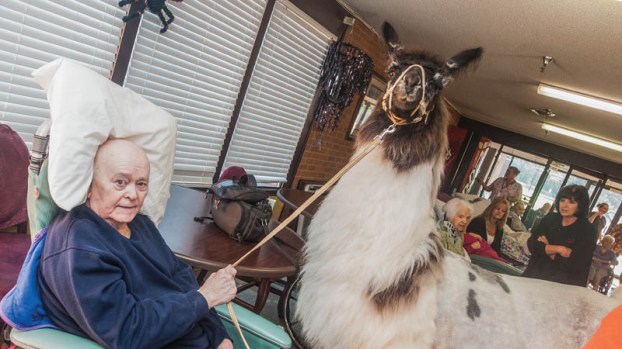 Fred Moore poses with Angel the llama during a short visit early Thursday at Harbor Healthcare in Ironton.

It’s not everyday you see llamas, unless you’re Judy and Tom Ross. The Chesapeake couple has been raising llamas for 21 years.

Once a year, the animals are sheared to harvest their hair, which is then spun into yarn, then they sell it to specialty shops and at arts and crafts shows in the region as Back Porch Fibers.

Their other business, Good News llamas, takes some of their 18 llamas and two alpacas to places so people can meet the animals that are native to South America.

On Thursday, the llamas made an appearance at Harbor Healthcare in Ironton for the residents to see the fuzzy creatures up close. It’s not an uncommon event to see the llamas in public. The couple takes the animals with names such as “Angel,” “Resounding Joy: and “Tizzy” (short for “Tis so sweet to trust in Jesus”), to events throughout the regions, such as Senior Day at the Lawrence County Fairgrounds, local nursing homes, schools and foster homes.

Tom said the llamas are well-behaved. While very attentive, he said they can also be a little “aloof.”

“They’re kind of like a cat,” he said. “Sometimes they want to be petted. Other times, they’re not interested in being touched.”

Judy said she finds the animals, which they’ve allowed into the house, to be calm and says watching them can be “therapeutic.”

Tom, a horseman and breeder of show dogs was at an event in Columbus two decades ago when he saw a sign proclaiming  “Come See the Llamas.”

That was it. Six months later, they had his first llama.

For more information on Good News llamas and Back Porch Fibers, visit www.goodnewsllamas.com

For the full story on Judy and Tom Ross and their life with llamas, check out the November-December issue of Tri-State Living magazine with an article by Heath Harrison and photos by Jessica St. James.