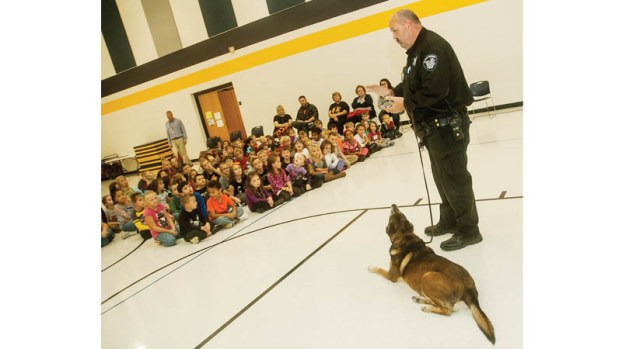 SOUTH POINT — Representatives from Spectrum Outreach Services and deputies from the Lawrence County Sheriff’s Office paid a visit to South Point Elementary on Tuesday to educate children about the dangers of drugs.

It’s part of the Red Ribbon campaign, which has brought the speakers to schools throughout the county for the past few weeks.

“It’s a seven-day, nationwide effort,” John Chapman, public relations officer, for the sheriff’s office, said of the annual visits. “We started last week. And we speak to the kids on drug awareness. This year’s theme is ‘Your future is free, stay drug free.’”

Stacy Howard, clinical director for Spectrum, started off the assembly, by teaching the children the difference between “good drugs,” such as antibiotics and prescriptions, and “bad drugs,” such as cocaine, alcohol and heroin.

Howard said more than 4,000 people have overdosed on heroin in Ohio this year.

She told the children if they were offered drugs to “say no and tell the nearest adult.”

“I’ve also brought some special friends,” Chapman said, introducing the audience to Eddie the Eagle and McGruff the Crime Dog, who led the children in cheers.

Two assemblies took place at South Point, with grades kindergarten through second watching one, and third through fifth participating in the other.

Chapman said the group would visit every elementary school in the county, with stops planned for the Open Door School in Ironton and Symmes Valley Elementary for the coming week.