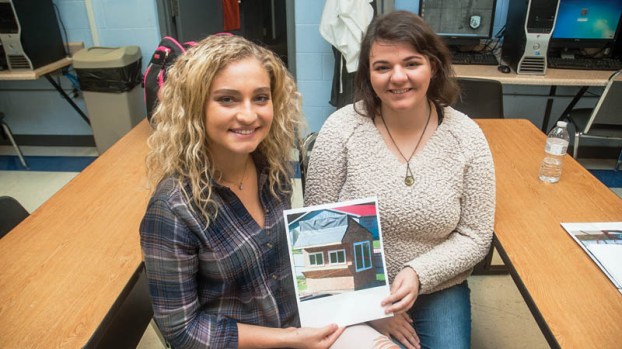 Alison Franz, left, and Savannah Stidham, with Project Lead the Way display a photograph of their completed ticket booth that currently sits at the football field at Symmes Valley High School.

From design to construction

Ironton seniors Alison Franz and Savannah Stidham said the program was approached by Darrell Humphreys, the superintendent of Symmes Valley schools, about the need for a new ticket booth for the football field.

They said they were informed of the need by Matt Monteville, director of satellite operations for Collins, and the program’s transition coordinator.

“They have to us and said ‘We have a project,’” Franz said. “The old ticket booth was in pretty rough shape.”

Franz and Stidham met with Humphreys to discuss specifics and presented three designs.

“He told us the things he liked and didn’t like,” Franz said.

Humphreys approved a final design, which Monteville praised for its uniqueness.

“We made sure we added windows and doors, and that the insides were not exposed to weather,” Stidham said.

“We had quite a bit of help,” Stidham said. “There were a lot of people working on it.”

Cement was poured, a wooden framework was constructed and the ticket booth began to take shape. Exterior metal, donated by Patriot Metals, put the finishing touch on the project.  A brand new booth will be ready for the Vikings’ 2018 football season.

“We like the fact that this project is being accomplished through a student based initiative that provides hands on opportunities for kids at all stages of the project,” Humphreys said. “It has applications of both STEM and vocational education.   We appreciate and value our partnership with Collins Career Technical Center.”

Ival Shields, senior engineering instructor for CCTC, said students all create a capstone design, but in the case of Franz and Stidham, the project went further than most get to.

“It happened that they chose a real-world project that they could see from design to construction,” he said, adding that the two were able to learn about costs, supplies and building constraints. “Most projects usually end at the prototype.”

Franz and Stidham began STEM classes in eighth grade and will be finishing their fifth year, Monteville said.

Monteville said CCTC has engineering programs in the six of seven Lawrence County school districts in which it offers Project Lead the Way courses.

Voters in Lawrence County will decide on renewing a property tax levy that funds building and equipment for CCTC in next week’s general election. Monteville said passage of the levy will free up other funds at CCTC for STEM education.

“Career tech allows to students to have real-world experience they would not get otherwise,” he said.