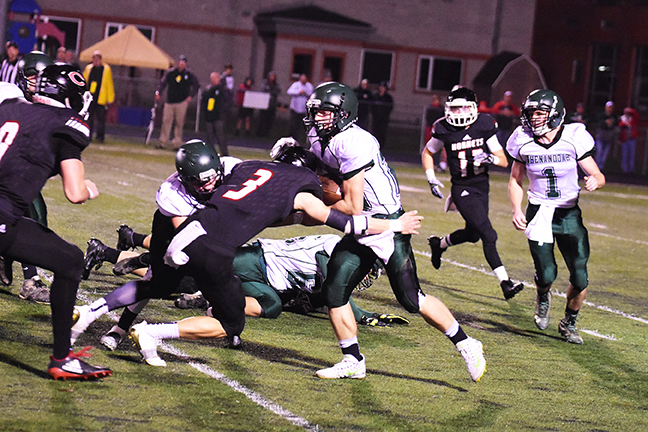 COAL GROVE — It’s a familiar place but an unfamiliar face.
The Coal Grove Hornets will play in the Division VI Region 23 regional semifinals at 7:30 p.m. at Lucasville Valley.
The Hornets played at Lucasville just last season against the Valley Indians. They also played a playoff game there in 2012 in the first round of the playoffs against Valley.
But this time Coal Grove (10-1) will battle the Chillicothe Southeastern Panthers (11-0), the first time the two schools have ever met in football.
The other Region 234 semifinal game has Fort Frye (10-1) playing unbeaten Nelsonville-York (11-0) at New Lexington.
In last week’s quarterfinals, Coal Grove edged Shenandoah 7-6 while Southeastern beat Steubenville Catholic 44-40. N-Y blanked Shadyside 34-0 and Fort Frye got past Northmor 6-0.
Catholic had just mounted a goal line stand with less than two minutes to play and attempted to run out the clock only to fumble. The Panthers recovered at the 10-yard line with 1:16 to play.
Southeastern quarterback Lane Ruby hit Dakota Houser with a 7-yard scoring pass with only three seconds to play.
Friday’s winner will meet in the regional finals on Friday, Nov. 17.
A complete list of the playoff pairings is on Page 7.