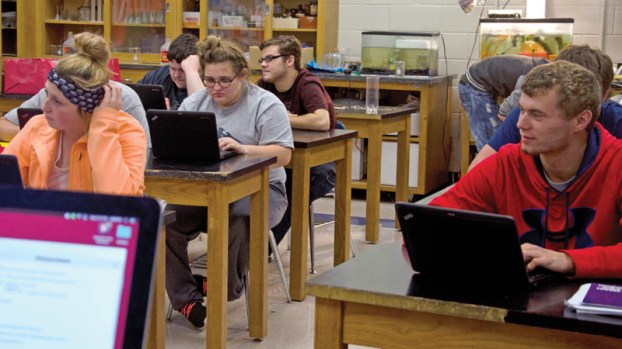 Students in the life science class at Symmes Valley High School work on the new Chromebooks the school district recently purchased for its student in the school system.

Investing for the future

WILLOW WOOD — Students at Symmes Valley schools are better situated for a 21st century learning experience this year, thanks to a recent purchase by the school district.

“We purchased personal computers that the kids can use,” he said. “Every kid from third through 12 has access to these now. Each student has one.”

Humphreys said the board began talking about the idea last spring and that computers have been shipped throughout this school year. He said kindergarten through second grade will have full access to computer labs, but the plan is for them to also be equipped.

He said the decision was spurred in part by a desire to improve test scores.

“A lot of testing is done exclusively online these days,” he said. “If a student is going to be tested, we felt they needed a piece of technology in hand during the school day.”

Humphreys said the board felt it was good investment for the future.

“We needed to make it,” he said. “This, along with the STEM classes, which just started and are very popular, show the community that the board of education is trying to meet the needs of students to make the curriculum more-suited for a 21st century experience.”
Humphreys said the effort has been overseen by Jeff Pauley, the district’s new technology coordinator.

“He’s been a fantastic addition to our team here at Symmes Valley,” he said.

He said the district is also taking part in Google Schools and that each student and staff has an email account through the schools.

Two of the high school’s students spoke of the benefits of the new computers.

Freshman Isabelle Carpenter said all of their assignments are done through Google documents.

“We use it for essays and to take tests in English class,” she said.

“And we use them in art class to draw from pictures,” she said. “It’d been really helpful for all classes.”

Anthony Martin, who teaches science at the high school, said the students use the computers to share daily logs with each other.

“If one member of a group is not here, another can take over,” he said, adding they are also used for daily questions and exit tickets in the class.

Martin said students can also use them to take notes from lectures and save them to space in the cloud server.

“If a student isn’t here that day, they can share them,” he said.

He said the classroom additions have proved popular.

“The more students start to use them, the more they like them,” he said.