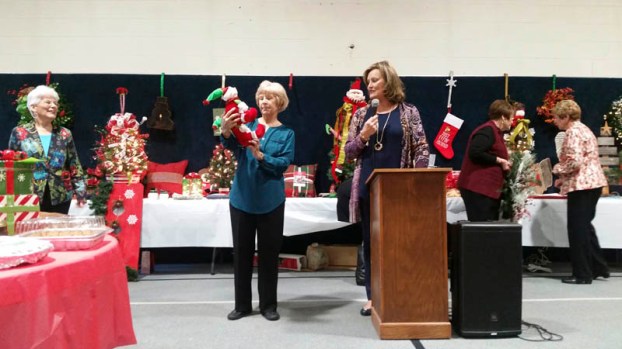 Members of the Child Welfare League had their annual auction on Thursday. Among the items up for bid were seasonal items like snowmen and wreaths as well as baked goods. The money from the event goes towards programs that help local children like Backpack Buddies, Harvest for the Hungry, City Mission and Sue’s Kids.

The bidding was fast and a little wild at Thursday’s Child Welfare Club’s annual talent auction.

The auction is one of three fundraisers the club does to raise money to help local kids.

“All of our members make things, and some buy things. We auction everything off,” said Debbie Jones, the president of the Child Welfare Club. “The money goes to support the donations we make to things like Sue’s Kids, Harvest for the Hungry, Backpack Buddies, and City Mission.”

The club also does a take out meal of their signature chicken and cranberry salads and sit down luncheon as their other fundraisers.

Jones said they hoped to raise around $2,000 at the auction.

Around 110 people attended the event and ate sandwiches the club made while they bid on the items.

The Child Welfare Club was founded in 1919 and times were tough in Ironton.

“It was because they need to get kids milk and things like that,” Jones explained. “Then it just became more. But everything is geared towards children. In some cases, it is helping the parents so the kids do not suffer. What ever is needed.”