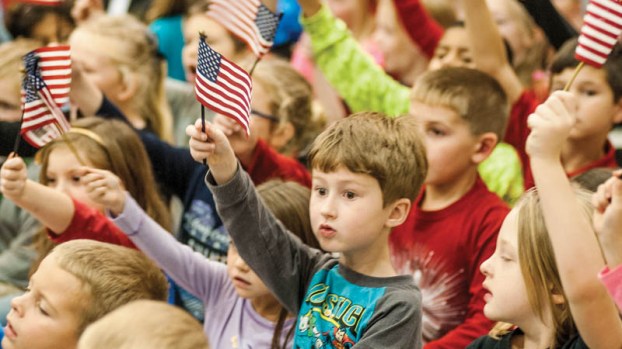 Preston Davenport cheers on visiting Veterans as they are introduced during a special Veterans Day presentation Thursday at South Point Elementary.

SOUTH POINT — Students and faculty at South Point Elementary honored veterans for their service on Thursday, with an assembly in the school’s gymnasium.

About 30 local veterans were treated to a reception in the library before being led in a procession into the event, where the student body was gathered.

“You’re following Mr. Christian’s lead,” principal Chris Mathes said as each entered.
Bill Christian, the school’s administrative assistant then led the room in a cheer for each, as the children waived American flags.

At the front of the room was the school’s fourth grade class, who stood on the risers as each veteran was introduced, accompanied by a student or faculty family member.

“We’ve done this event every year,” he said. “But this the biggest one we’ve had.”

The entire room sang the national anthem and recited the pledge of allegiance. Then, members of the fourth grade class then read poems and shared information on the holiday, followed by the grade’s choir singing three patriotic selections.

Mathes wrapped up the event by thanking those who came to the school.

“To our special guests, we hope we honored you and thank you for your service,” he said. “Without it, we wouldn’t be here today.”

The program was concluded with the playing of bagpipes by guest Roger Casey.

For photos from Burlington’s program, check out the Focus page on page 1C.

HarbisonWalker to host job fair for 40 positions The CEO of the company set to open a new manufacturing site... read more