Just One of the Boys: Symmes Valley Vikings’ Frankie Hunter powers her way through the man’s world of football 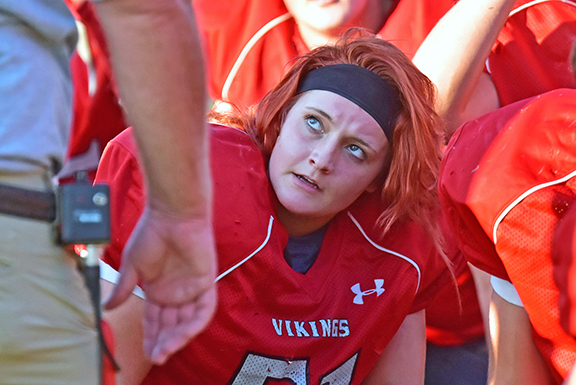 WILLOW WOOD — Forget Powder Puff football. For Frankie Hunter, it’s power push football.
There are some flag football games between girls for charity each year at local high schools, but girls’ participation in football has increased across the United States. There were 245 girls playing in Ohio during the 2016-17 season.
However, most girls participate as a kicker or wide receiver.
Not Hunter.
“She’s a defensive tackle. We put her in the gap and bring her up the field,” said Symmes Valley Vikings’ head football coach Rusty Webb of his senior defensive tackle.
Hunter said she likes playing in the trenches. In fact, she said it was her favorite part of playing football.
“Tackling guys was my favorite thing,” said Hunter.
The 5-foot-6, 160-pound Hunter is a three-year letter winner for the Vikings. Her senior year capped a career that began back in the second grade.
“I used to play in the front yard with my cousins Collin Webb and Derrek Smith (both former Symmes Valley players). They took me to the field to play with the little league team and see if I liked it and I loved it,” Hunter recalled.
Being a female playing football among the boys was never really a problem in terms of acceptance.
“All of (the boys) pretty much accepted me right away. Some of them didn’t realize I was a girl,” said Hunter.
“Against some of the other teams we played some parents got mad a female was playing a male sport, but there was nothing major. Most of the (opposing players) thought that it was awesome that I played.”
Coach Webb said there was never a problem once Hunter began playing in the program at the seventh grade level and up through high school.
“She’s always played with them. She started playing when she was little. The boys never think anything about it. We (the coaches) didn’t think anything about it,” said Webb.
“She’s always dressed in a different spot and waited for us to come out of the locker room. She gets the snot knocked out of her sometimes but she knocks the snot out of them. She’s been around the program for six years. She’s just another player.”
Not only were the Viking coaches and players accepting, but other high school coaches had a positive impression.
“Other coaches have been complimentary of her,” said Webb.
Hunter said her football experiences were all very positive with the exception of the fourth grade.
“I broke my arm in the fourth grade. I was out a week, but we wrapped it up and I went on with a padded cast. I loved the sport. I’d do anything to play,” said Hunter.
With her football career now just a pleasant memory, Hunter has become somewhat melancholy. She doesn’t plan any attempt to play at the college level and she doesn’t watch much football on television.
“I just plan on going to college and working. I don’t play any other sports. Playing is all I really cared about, honestly,” said Hunter who said her favorite team is the Pittsburgh Steelers.
“I like the Steelers, but I really haven’t watched them much this year. I really don’t have that much time anymore.”
Hunter did offer a bit of advice for any girl thinking about playing football.
“Play hard and give it your all. Stay strong in there and enjoy it. I already miss it,” said Hunter.
Spoken like a true football player.