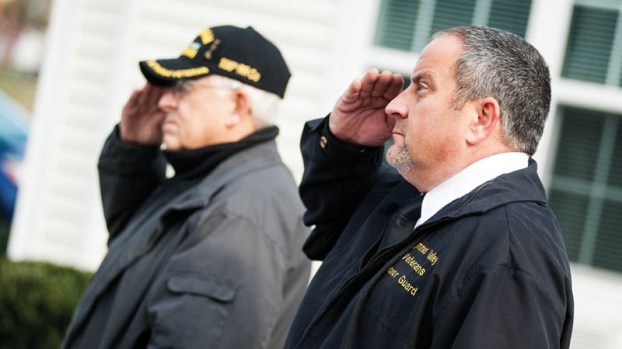 Wyngate at the RiversEdge recognizes veterans

Despite the freezing temperatures on Friday, veterans and others gathered around the flag outside of Wyngate at the RiversEdge in Proctorville to take part in a Veterans’ Day ceremony.

Proctorville VFW Post 6878 did a changing of the colors, replacing a faded American flag with a new one. Then, the Honor Guard did a 21-gun salute and played Taps in honor of the men and women who gave their lives in the service of their country.

Residents sat in chairs wrapped in blankets for the ceremony, prompting Bryan Gilpin of Hospice of Huntington to joke they that they “kept the temperature down. We don’t want anybody overheating.”

He said they were there to honor veterans and to remember the sacrifices they made.

Julie Stevens, a representative from U.S. Rep. Bill Johnson’s Ironton office, read a letter from the congressman, who served in the Air Force for 26 years and retired as a lieutenant colonel.

“Veterans Day is the day we as Americans remember the selfless service and many sacrifices made by our brave warriors,” she read. “These great men and women, many of which reject the title of hero, are in fact deserving of such. The United States, as we know it today, simply wouldn’t exist without those who have served throughout the course of our great history.”

Guy thanked them for answering the call to duty.

“You have made our armed forces the most respected in the world,” he said. He also thanked the family members of veterans for their sacrifices. “We know you have lived through difficult times and often take the heavy load to keep things going here at home.”