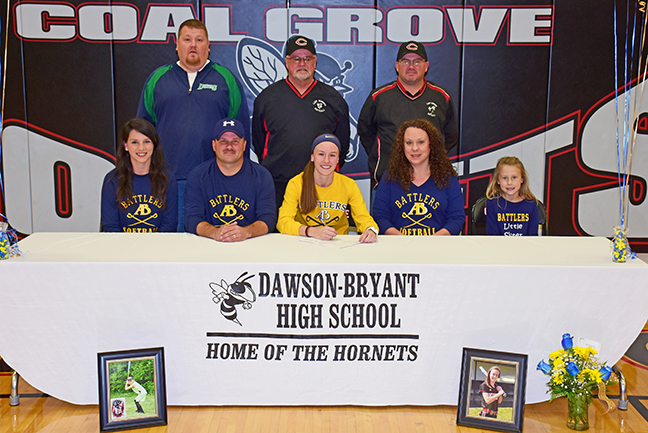 COAL GROVE — The old cliché says it’s not the size of the dog in the fight, but the size of the fight in the dog.
If that’s the case, Lauren Meyer could pass for a Rottweiler.
That kind of fight is just what the Alderson Broaddus Battlers’ head softball coach Rachael Mack was looking for when she signed the Coal Grove Lady Hornets’ softball standout.
Although Meyer is not a formidable figure standing at only 5-foot-3, she has a very strong arm and tenacious approach to the game. She said size had never been a factor.
“I don’t know. Just a lot of work, a lot of years playing,” said Meyer. “I never thought about it. Never bothered me. It’s never been a problem for me.
Meyer said a former player/coach relationship with Mack made her decision easy.
“I considered Glenville State and then the head coach there now (at Alderson Broaddus) was my travel ball coach at one point so we had close ties. And after I got the offer from them, then there was really no looking anywhere else because they offered me a full (scholarship),” said Meyer.
Coal Grove Lady Hornets’ head coach Wayne Kellogg loves the speed and excitement Meyer brings to the game. Kellogg is impressed with Meyer’s skills, but he admits he has some tough moments.
“Lauren is one of the best baserunners I have coached. Sometimes she makes me a little nervous, but she always makes it around the bases. Lauren makes things happen when she’s on base,” said Kellogg.
As a three-year starter, Meyer has collected 116 singles, nine doubles, six triples and scored 101 suns. She has batted .593 with 69 stolen bases.
A team captain, Meyer was first team All-Ohio Valley Conference and second team all-district last season as Coal Grove won its first-ever sectional title.
She was also selected to the All-Ohio Underclassman team the past three seasons.
Her hitting success at the high school level has been due to a change in hitting style. Meyer said she really didn’t convert to a slap hitter until the middle of her freshman season.
“I’ve only been doing it for a few years. I did it because of speed. Definitely speed,” said Meyer.
“I heard it from several people. Morgan Circle is the one who helps me train and she agreed that I needed to switch because it would get me a higher on-base percentage and more looks by colleges.”
Meyer was recruited not only as a shortstop but as an outfielder, too.
“They’re bringing me in as a shortstop and maybe a centerfielder so I’ll between the two, wherever they need me,” said Meyers.
“(Mack) knows that I’m a leader and she wants me to come in — even as a freshman — and be a leader and leadoff batter and help lead the team to more victories. She’s trying to build (the program).”
Kellogg said Meyer has been a vital cog in the Lady Hornets’ success.
“I said the other day that Kasey Murphy was the heart of this team, which is true, but were have five other seniors and three juniors that makes that one heart beat in rhythm. Lauren Meyer is another one of our top players on this team and in the OVC,” said Kellogg
“She is a very good left-handed slap hitter and our starting shortstop for all four years here at Coal Grove. She’s been a joy to coach for me and my coaches Wyborn Riley and Mitch Crum.”
Meyer is looking forward to her senior year, but looking ahead she is confident she will be able to play at the college level with Alderson Broaddus.
“I think it’s going to take a lot of work,” said Meyer. “Where I’m at now as a hitter and a fielder I think that it’s going to take a lot, but I think that I’ll fit in and I’ll do fine at the next level,”
Lauren — who plans to major in pre-physical therapy — is the daughter of Mark and Heather Meyer.

There will be a chance for people to get checked for diabetes at the Ironton City Center  from 9 a.m.-1... read more