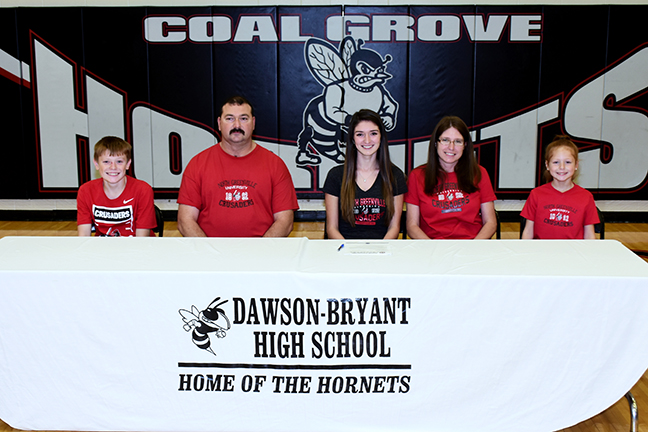 COAL GROVE — Alexis Hall may not be a fan of singer James Taylor, but she might like his song “Carolina In My Mind.”
The Coal Grove Lady Hornets 5-foot-10 senior guard must think of North Carolina as a friend after signing a letter-of-intent to play basketball next fall for the North Greenville Crusaders.
Hall was headed to North Carolina one way or the other. She picked North Greenville over two other North Carolina schools: Belmont Abbey College and Lenoir-Rhyne University.
“I like the South because the weather is warm, but where I’m going it’s in the mountains so it’s not really warm there. But it’s warmer than it is up here, so that’s good,” said Hall.
For the past three seasons Hall has played at West Virginia Class A power Huntington St. Joseph where the Lady Irish won state titles in two of the past three years including last season as Hall scored 12 points in the championship game.
Hall said her career at St. Joseph helped improved her game.
“It’s helps a whole lot whenever you’re getting ready to go to college. We traveled so much to like Maryland and Tennessee and everywhere and played some of the best competition in high school, so it’s helping a lot in getting ready for college,” said Hall.
Hall has visited the North Greenville several times and watched old game films to get an idea of what to expect from a competition level.
“It’s good for me so I think I’m going to fit in with it,” said Hall.
“(Coach Willis Holliday) hasn’t really specified where I’ll play yet. He said it would be like a combo guard kind of. If he wants me to play a guard, I can play a guard. If he wants me to shoot, I can shoot. It’s whatever he wants me to do at that time.”
Although Hall will play where she is needed, she does have a preference.
“I favor the two or three,” she said with a grin.
The Lady Crusaders won five straight games at the end of last season to finish 14-15 and have several starters returning.
Moving up from high school to college will not be easy for a freshman and Hall understands what it will take on her part to make the adjustment.
“I definitely need to get stronger, so just working out and getting ready for it. The basketball aspect of it I think I’m good with that part. The working out and conditioning part is what I need to work on,” said Hall.
Adjusting to the playing level isn’t the only thing Hall faces. She said travel is more extensive at the college level and she’ll have to adjust her study work habits.
“We’re going to have to do homework on the bus every time we get a chance.
Alexis — who plans to major in accounting — is the daughter of Bob and Teresa Hall.

Jim Walker jim.walker@irontontribune.com They say that the only statistics that matter are the number of wins and losses. Still, the... read more