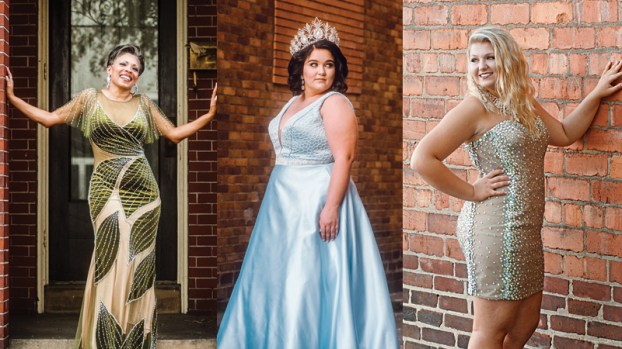 Putting on the Glitz

Getting ready for a formal event can be a time-consuming, and an often expensive task, but at Decadence, The Unique Boutique in Ironton, a hefty price tag won’t be what stands in the way of purchasing a designer gown.

“Shopping should be fun,” said Drew Scott, who co-owns Decadence with his business partner, Kevin Allen. “I will put the retail price on a dress, but I will never sell at that price.”

Scott, a Columbus, native, moved to the Tri-State when he was a child.

“My mom was from a small town in Kentucky, and my dad was from Daytona Beach,” he said. “We moved around a lot for his job. Then, when I was eight, my mom said she wanted to raise me in a small town.”

He studied interior design, art history and architecture and later went on to later start his own business, The Antiquated Angel, in Florida.

“We did interior design, antiques, florals, weddings … I also did window displays. I loved that part,” Scott said.

Unfortunately, Scott said he got “burned out” at the age of 30.

“At that point, I decided I wanted be a makeup artist, so I had to go to cosmetology school,” Scott said.

Scott returned to Columbus a little while later and got a job at Aveda at Easton Town Center. As time went on, though, he   realized he wasn’t doing as much makeup as he wanted.

“So, I got a call from Nordstrom, which was opening up in Easton. Their head makeup artist for Chanel had quit, and they offered me the job,” he said.

Scott went on to work for luxury department stores, including Neiman Marcus, Saks Fifth Ave, Lord and Taylor, Jacobson’s, Lazarus, Burdines, Bloomingdales, around the country. He was also a regional makeup artist for Laura Merceir, NARS and Lancôme. He returned to the Tri-State in 2009 to be closer to family.

“I was gone 30 years,” he said. “My mom lives in Portsmouth. At the time, she had retired from nursing, and she wanted to do something else. She wanted to open up a vintage clothing shop.”

So, they did — Andy’s Vintage, located at Ghost in the Attic Antique Mall in Portsmouth. Eventually, Scott, who had judged numerous beauty pageants, decided he wanted to branch into formalwear.

“When I came back, I was trying to decide what to do, and when I noticed the formal shops and their prices, I was just appalled. This is Appalachia — $1400, $800 or even $600 for a dress is ridiculous, especially with so many formal dances.”

In 2010, Scott and his mom partnered with Kelly to open Decadence, The Unique Boutique inside Ashland’s Camayo Arcade. The business quickly outgrew its original location and moved to a larger space at the corner of 16th Street and Greenup Avenue. Decadence even went on to win the New & Emerging Business of the Year Award at Northeast Kentucky Small Business Awards in 2012.

“It was such an honor to receive that award,” Scott said. “Usually, you aren’t considered for that unless you’ve been in business for three to five years. We’d been open for less than two, but we had just done so much in the community in such a small amount of time, that it was presented to us.”

Sadly, Scott closed Decadence in 2013 after his mom had a stroke.

“I had to move to Portsmouth to help her,” he said. “I kept things up online, though.”

Once his mom had recovered, Scott started looking for a home to buy. He found one in Ironton, where, earlier this summer, he decided to reopen Decadence.

“No one else carries them around here,” Scott said.

This season, Scott said, the 1920s, 50s and 70s are back in style. That includes long sleeves and two-pieces, even ball gowns, and if you purchase a dress from Decadence, there’s a high chance you’ll be the only one wearing it. That’s because Scott is selective about the shop’s inventory.

“I don’t want 100 pieces of any one designer in my shop,” Scott said. “Our look is different, too. I steer away from having the same thing. We’re more cutting-edge, I guess you could say.

The dresses at Decadence are also inclusive regarding size and style.

“We go up way past size 34,” Scott said. “And, our models range from 14 to 75. I don’t think you should ever pigeon-hole yourself. We cater to everybody.”

Of course, as with a lot of small businesses, personal attention is a main focus.

That drive to help is evident in Decadence’s community involvement.

“We’re members of the Lawrence County Chamber of Commerce, we’ve always been involved with AARF (Ashland Animal Rescue Fund) … The Paramount we’ve always loved, too,” Scott said. “You have to be involved and take pride in your community. That’s why I urge people to support local business here in the Tri-State. You can get the same things, some even better then you would in a bigger city, and for less.”

Decadence: The Unique Boutique is located at 113 South Third Street in Ironton. Current business hours are from 12-6 p.m. Wednesday through Saturday. Those will change to full time in January. For more information, call 740-5501419 or visit www.decadencefashions.com. Like/follow Decadence on social media: www.facebook.com/Decadenceuniqueboutique and @drew_at_decadence on Instagram.

An acre of light

Every year, Clifton Mill is covered by 4 million Christmas lights for a dazzling display It is like nothing you’ve... read more