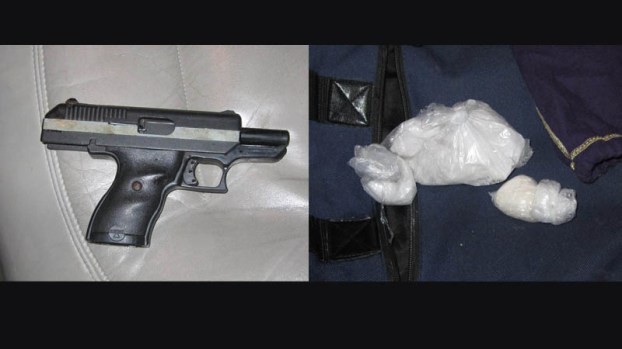 A firearm, methamphetamine and cash were recovered during a busy by South Point police early Wednesday morning.

South Point police chief says meth use on the rise

According to information posted on the department’s Facebook page, South Point officers attempted to make a traffic stop on a white Cadillac, following a marked lanes violation.

The vehicle failed to stop, police said, and continued eastbound at a low rate of speed. The officer, believing the motorist was impaired, pulled alongside the vehicle in an attempt to have the driver to stop, at which time police said the driver displayed a firearm.

The officer requested assistance and police said the vehicle proceeded to Huntington, where that city’s police units intercepted the low-speed pursuit and were able to stop the vehicle.

Police said a search of the vehicle yielded the firearm, drugs and cash. The driver of the vehicle was apprehended and the passenger fled the scene and remains at large.

South Point Police Chief Chris Mahjer spoke on the problem of methamphetamine in the region at last week’s meeting of village council.

Mahjer said as heroin use has declined, officers have seen an increase in methamphetamine use in the area.

“Meth is back, and it’s back with a vengeance,” Mahjer told the council.