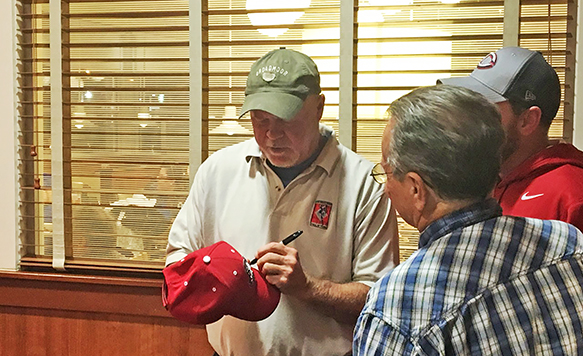 There were plenty of highlights during Tom Browning’s career with the Cincinnati Reds, but the it wasn’t hard for the left-handed pitcher to pick his greatest accomplishment.

This is coming from a player who pitched the only perfect game in Reds’ history — he came within two out of a second — and the 12th in all of baseball history.

This is coming from a guy who was 20-9 his rookie season and was the National League Rookie Pitcher of the Year and the runner-up for the overall Rookie of the Year award.

This is coming from a guy who posted a 123-90 career record with a 3.94 earned run average, exactly 1,000 strikeouts and completed 31 of the 302 games he started, something unheard of in today’s game.

But he became known as Mr. Perfect because of his perfect game.

Except in his mind.

“I didn’t do that by myself. I get credit for it. By far the World Championship is greater than the perfect game,” said Browning.

“What we went through in 1990 and the kind of year we had, they were real good guys. We’ve had a couple of reunions since then and the smile never left my face when these guys came to town.”

Browning was in town on Wednesday at Frische Big Boy as the guest speaker for the first Ironton Chapter meeting of the Reds’ Hall of Fame and Museum.

Browning led the Reds with 15 wins during the 1990 season although pitcher Jose Rijo was voted the World Series Most Valuable Player.

The perfect game didn’t mean much to Browning’s sons, either. Browning said the baseball that was the last out sat on his mantle for three years before it mysteriously disappeared one day.

Browning said the rule in the house was no one touched anything with writing on it. Unfortunately, the perfect game baseball had no writing.

“I asked my son (Tucker) if he knew what happened to that ball. He said, ‘yeah, me and Kyle took it out back and we’re playing with it.’ What happened to it? ‘Kyle hit it into the woods.’ Well, did you go get it. ‘No, why?’ I said it was the last out of my perfect game. He said, ‘sorry.’ He didn’t care.”

The perfect game was on Sept. 16, 1988, against the Los Angeles Dodgers with Browning throwing 72 strikes out of 100 pitches. Browning had a perfect game against Philadelphia on July 4,1989, when Dickie Thon singled leading off the ninth inning.

“Dickie Thon came up and I threw a pitch right down the middle. He should have hit it hard and he did,” said Browning.

“I remember Lenny Dykstra came up in the seventh inning and hit a line drive and I had to duck and I catch it. Every inning there was a great play. I walked into the dugout after the seventh inning and (manager) Pete (Rose) was always there at the end of the dugout. I’m walking in and he’s just staring at me. Three line drives for outs. I said, ‘Don’t even ask, don’t even ask.’ He just shook his head.”

Before his perfect game, Browning had a no-hitter in June and with one out in the ninth inning Tony Gwynn of the San Diego Padres singled.

Browning got in trouble on July 7, 1993, when he left the dugout at Wrigley Field in Chicago and would up across the street in uniform and watched a half-inning.

“It was the year Tony (Perez) got fired (as manager) and we were 25 guys going in 25 different directions. I did it for levity, to give us something to laugh at,” said Browning.

“After the game I totally forgot it and a reporter said can you tell me about your rooftop and before I could answer that (manager) Davey Johnson said I need to see you in the principal’s office,” said Browning.

“To be honest, that was the (general manager) Jim Bowden era and I was not a Jim Bowden fan. We didn’t get along at all. We didn’t even talk. I called him Boy Wonder and he hated that. I didn’t care because he was younger than I was.

“So Davey was kind of giving the Bowden side — insubordination, release me, suspend me — all I did was leave the stadium in my uniform. He wanted to make a big deal out of it. He started chastising me and I said, ‘Stop.’ I said a few choice words. I said this has nothing to do with you. We’ve been 25 guys going in 25 different directions since Tony got fired. We really liked playing for Tony. I said I deserve a fine, tell me what it is and I’ll pay it.”

Browning was fined $500 — the maximum allowed by the union agreement — but he wanted the check made out to the charity of Johnson’s girlfriend. Owner Marge Schott found out and wasn’t happy because Johnson wasn’t married and was living with his girlfriend.

Two weeks later the Reds were playing the Florida Marlins and new owner Wayne Wuizenga asked Browning to sit in the right field restaurant at their stadium.

“I said ‘No, tell him thank you. But I’ve caught enough hell for doing it one time.’ But it was a career highlight.”

With all that happened and all the highlights and lowlights, Browning said it was worth the ride.

“It was really fun. It went by really fast. If I could give it all up and do it again I would,” said Browning.

NOTE: An individual HOF  membership is $60, a family membership is $90, the MVP is a family and friends membership for $200 and a World Champion membership is $1,000.
Interested persons should contact Sherry Rowland at the Hall of Fame Museum at 513-765-7926.
To be part of the chapter meeting, fans must be members of the Reds’ Hall of Fame. There are different levels of Hall of Fame memberships.
Memberships not only entitles persons to passes to the Hall of Fame Museum but they receive other items such as Reds’ yearbooks, passes to Redsfest, 10 percent discount on merchandise, various bobbleheads and much more depending on the level of membership.
The Reds’ Hall of Fame is open from 10 a.m. to 5 p.m. Tuesday through Sunday during the offseason.
However, it is closed on Sundays when the Cincinnati Bengals have a home game as well as Thanksgiving, Christmas and New Year’s Day.