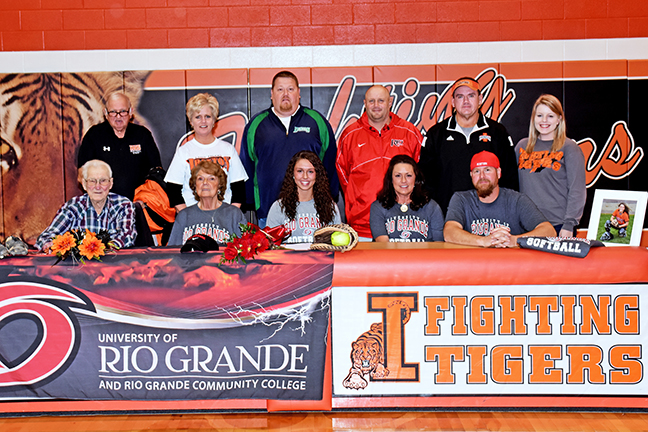 McKenzie Cremeens doesn’t just play like a catcher, she has the mind-set of a catcher, too.
The Ironton Lady Fighting Tigers’ senior catcher has been a catcher during her high school career and now she’ll get to continue playing that position in college after signing to play at the University of Rio Grande.
“I just loved softball since I started playing. As a catcher back there, I’m in control and I can see the whole field. I just love getting dirty and being outside and being rough and tough,” said Cremeens.
Playing catcher at the college level played a part in her decision to sign with the RedStorm.
“I got a huge offer from Fairmont State University but it was really far (from home). It was hard to turn down but I had to,” said Cremeens. “I had offers from Roanoke (Va.). I really liked Roanoke, and I had an offer from NKU (Northern Kentucky University). There were several decisions and it’s hard.
“(Rio Grande) is close and I’ll be playing the position I want to which is catcher. And it’s free. Everything just fit and it was just nice. I liked it.”
Rio Grande head coach Chris Hammond said there were other factors in wanting to sign Cremeens.
“The big thing we saw was a great kid on and off the field. And then her versatility of the positions she can play. She’s a very talented athlete that I feel can come in and make a big impact in that 2018 class. We’re excited that she’s coming to Rio,” said Hammond.
One of Cremeens’ key assets is her versatility and it isn’t lost on Hammond.
“We’re going to look for her to play anywhere on the field. I can tell you right now that we don’t have a lot of outfield depth. That’s one place,” said Hammond.
“I feel like pitching and catching you can’t have enough and she’ll definitely get an opportunity to be behind the plate. I look for her to play infield, outfield and behind the plate.”
A second team Division III all-District selection last season, Cremeens is certain she can play at the next level regardless of the position.
“It’s just how hard I’m willing to work which is a lot. I know they already have a catcher. I’ll work harder to earn my spot,” said Cremeens.
“I feel like I’m pretty well prepared. I’ve played travel ball since I was 12 years old. It’s been quick and fast and I’ve gotten used to it. I feel like I’ll go in ready to go.”
While earning playing time is the first thing on Cremeens “To Do” list, she has loftier goals for the future.
“I hope to go in and earn maybe be All-American. I’m willing to work for it. I’m hoping I’ll get awards for my work,” said Cremeens.
McKenzie — who plans to major in physical therapy and geriatrics — is the daughter of Chris and Aaron Ashley.

Jim Naveau jnaveau@gmail.com COLUMBUS — Illinois’ football program has been through so many rebuilding projects in the last 25 years... read more