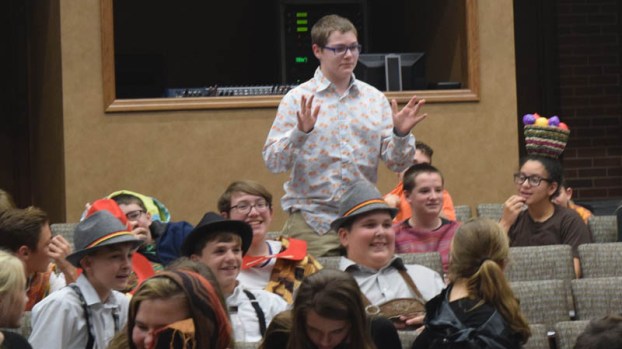 Walters said the event, in addition to educating the students about the United Nations, also teaches them about problems in the world faced by the countries they represent.

“It teaches problem solving,” Walters said. “They present a problem and come up with a solution.”

Dressed in costumes from their assigned countries, students represented locales such as South Sudan, France, Australia, Somalia and others.

A group, representing Yemen, came before the gathering and discussed the cholera outbreak in the nation, requesting funding for the efforts to combat it.

Walters said the body then votes on the proposed solutions, not all of which are approved.

“They can be very critical,” she said of student reactions. “A lot of them say they “strongly oppose this” in their votes.”

Walters said the Model United nations coincides with World International Week, and that the grounds at OUS was decorated with flags from dozens of nations around the world, put on display by Tim Mollett, a professor in the school’s Spanish department.

Festival of Trees and Christmas Market this weekend