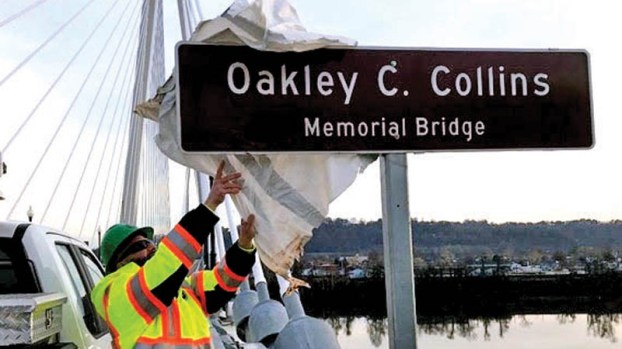 Lawrence County ODOT’s Mark Gleichauf unveils the new sign for the Oakley C. Collins Memorial Bridge. The bridge won the 2017 Bridge Award of Excellence in the category of Long Span and Cable-Stayed Bridges from the American Segmental Bridge Institute.

Ironton is now the site of an award-winning bridge.

On Friday, the Ohio Department of Transportation announced that they and the team that built the new Oakley C. Collins Bridge were recognized by the American Segmental Bridge Institute (ASBI). The bridge won the 2017 Bridge Award of Excellence in the category of Long Span and Cable-Stayed Bridges.

“It is indeed an honor to have the project be selected for this award,” said ODOT District 9 Deputy Director Vaughn Wilson. “I congratulate our team from ODOT, Brayman Construction, FIGG, Finley Engineering Group, AECOM and VSL for their efforts to deliver a successful project that preserves our transportation system in southern Ohio and serves the people on both sides of the river well.”

“I can’t say enough about the new bridge.  It’s aesthetic design has made a huge impact on our downtown community,” she said, adding the blue  lights has changed the night time view of Ironton. “We have people driving to our area just to see the new lights.  This in itself makes an impact on our economy.  Visitors tend to purchase gas, food and a possible overnight stay, just to see a bridge.”

The award comes just before the bridge’s marks one year since it opened in November 2016 to replace the former Ironton-Russell Bridge. To mark that, its new name and signs to designate the bridge were unveiled this week by Lawrence County ODOT’s maintenance crews. Collins was in the Ohio Legislature for 37 years and was the chair and the ranking member of the Senate Education Committee for decades. While in the legislature, he advocated for legislation that created Ohio’s vocational school system and for legislation that implemented Ohio’s use of fluoridated tap water.

Accepting the award on behalf of ODOT at the annual convention in New York City in October was District 9’s area field engineer and the Collins Bridge project manager Dave Bame.

“It was an honor to represent the department and the project team, and it was very exciting to be part of a ceremony in which industry leaders recognized our project as one of the best in the country,” said Bame.

In their selection, members of the ASBI jury said the bridge “demonstrated how segmental concrete provides multiple options to a designer and contractor to design and construct a long-span bridge fast and economically.” The comments also noted that ODOT’s longest span bridge is “an amazing technical and aesthetic achievement, and the use of precast stay blocks and back span falsework was innovative” to its construction design.

The Oakley C. Collins Bridge was one of eight bridges nationwide that were selected as outstanding examples of segmental concrete bridge construction, with consideration given to innovative design or construction, construction schedules, aesthetics, cost and the impact on motorists in the categories of Mass Transit/Rail Bridges; Bridges over Water; Long Span and Cable-Stayed Bridges; and Rural Bridges and Viaducts.

According to its website, ASBI is a “nonprofit organization to provide a forum for project owners, designers, constructors and suppliers can refine current design, construction and construction management procedures, and evolve new techniques that will advance the quality and use of concrete segmental bridges.”