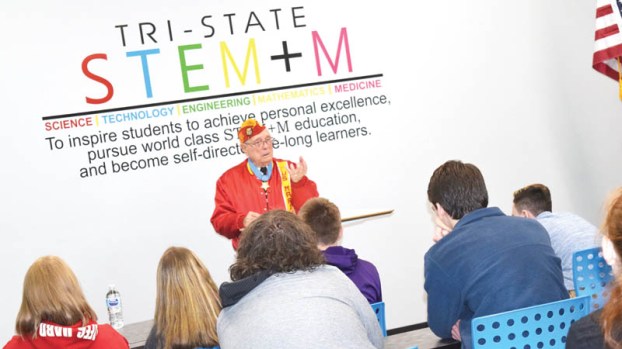 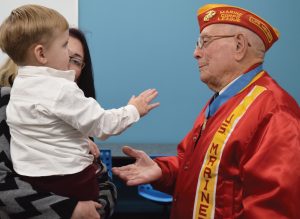 SOUTH POINT — Students at Tri-State Early College High School had a visit from a prestigious guest on Monday, who spoke of the value of contributing to something greater than one’s self.

Hershel Woodrow “Woody” Williams, of Ona, a veteran of World War II, is the second oldest living recipient of the Medal of Honor.

His only cover was from riflemen, and, Williams, armed with a flamethrower, destroyed several Japanese machine gun pillboxes, which opened a gap in the enemy defenses and allowed U.S. forces to move forward.

Williams told the students about the process by which he received the medal, though he said there are likely many who should be honored, whose stories are not known.

“Many times, an individual did something, but there are no witnesses,” he said.
Williams shared his philosophy with the students.

Williams said the circumstance of receiving the Medal of Honor changed him.

Williams said his life was never the same.

“I then represented something else. I also represented the two Marines who gave their life to save mine,” he said.

Williams said his values were also shaped by a teacher in his youth, who taught him “to appreciate freedom.”

“The one thing she taught me that stuck with me is that I was one of the most fortunate people to be born in America,” he said.

He encouraged students to be part of something greater, in whatever form that may take.

“We’re not all suited for the same thing,” he said. “If everyone is interested in the military, what will everyone else be doing?” he said.

Williams said when he entered the military, he didn’t know of Japan.

“I also didn’t know of the Pacific. I’d heard of the Atlantic Ocean, because I was taught in school that a famous ship had sunk in it,” he said. “But the Pacific Ocean? I didn’t know we had one, but I ended up in it.”

Williams told the students that they honored him by just letting him come to speak.

Jayshree Shah, the school’s director, told him it was an honor for the school to have him.

“There’s a lesson to be learned,” she told the students, following his talk. “He talked about circumstances. Think about your circumstances and take advantage of the positive and not the negative.”

Williams’ visit came about through the efforts of Paul Sites, who has two daughters attending the STEM+M school. He said he first met Williams when he started in the military in 1994 and the two have stayed in touch.

“He shows that anybody can be anything,” Sites said. “He didn’t set out to do this. He did what he felt was right.”

Williams said he hoped his talk would convey to the students what they have as Americans and inspire them in “some way to contribute to their country and make it better.”

“These are some of the brightest students,” he said. “They’re going to be leaders in America someday.”

Festival of Trees and Christmas Market this weekend