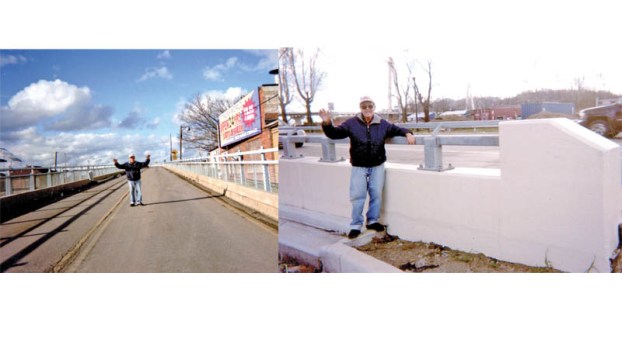 It was the end of an era and the beginning of another. Lawrence County resident Bill Neville walks the spans of the new Oakley C. Collins Memorial Bridge and the old Ironton-Russell bridge on Nov. 23, 2016, the day the former bridge closed to traffic and the new one opened. Neville said he was walking the two for he and his brother Fred, who was too ill to attend the ceremony. Fred had been carried across the old bridge by his mother, shortly after its opening in 1922.

Thursday marks one year since the closing of the old Ironton-Russell bridge and the opening of the new Oakley C. Collins Memorial Bridge.

On Nov. 23, 2016, Lawrence County resident Bill Neville, walked the span of both bridges.

“One for me and one for my brother Fred,” he said.

Both brothers were veterans of World War II, with Bill serving in Japan and Fred in Italy.

The family has attended the Community Missionary Baptist Church in Deering since 1937.

“Fred was taken for a walk on the first bridge in 1922 in the arms of his mother, Birdie Neville and grandmother, Lucinda Blankenship, shortly after its dedication,” Bill said.

Fred was too ill to attend the dedication of the new span, Bill walked in his place. Fred died on April 2, 2017 at 94 years old, the same age as the original bridge.

Signs naming The Oakley C. Collins Memorial Bridge in honor of the late state senator were unveiled this week.

The main span of the old bridge was lowered to the river in January and its remaining portions were demolished in May 17.

Recognized as excellent Ironton is now the site of an award-winning bridge. On Friday, the Ohio Department of Transportation announced... read more