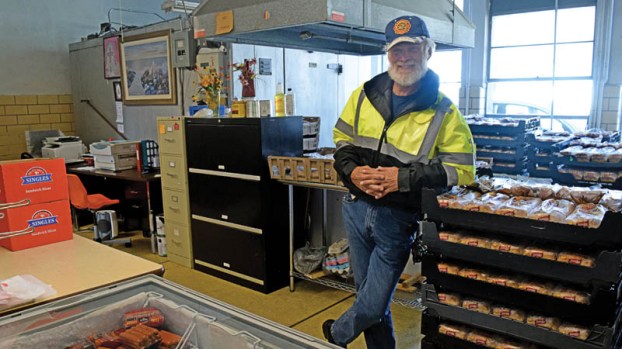 Todd Thacker is a kitchen volunteer at the Chesapeake Community Center. The center is facing a financial crisis and could close after the end of this year, director Ruth Damron says.

CHESAPEAKE — The Chesapeake Community Center could face closure after the end of the year, if its financial situation does not improve.

Ruth Damron, the center’s director, said the facility, located in the old Chesapeake High School, is in “dire straits.”

“We have no money,” she said. “At our last meeting, we heard we may close after the first of the year.”

The center has been open for more than three decades, Damron said, and is privately-owned, co-owned by the Lawrence County Port Authority, and is open to the public.

She said in order to stay open, the center would need to get more people to sign up for memberships.

“It’s only $20 for adults and $15 for students,” she said. “We have nothing, except what we take for memberships.”

Damron said the center has five weight rooms members can use, and offers classes, such as Zumba, Modern Arnis stick fighting and karate throughout the week.

“We’re looking for someone to teach yoga,” she said. “And we’re always looking for more programs.”

She said the gymnasium also offers a place for local children and teens to play basketball.

“It’s somewhere kids can come after school,” she said.

In the summer, she said the center has a track, a ball field and a walkway.

The Chesapeake Community Mission Outreach, which distributes food to low-income families and organizes the annual Christmas giveaway, is based in the building and would likely have to relocate if it closed, Damron said.

“They would have to, if we can’t keep it running,” she said.

She said the CMO, which receives funding, has helped with the electric bill. However, in recent weeks, the building has been without heat.

Damron said she has talked to Bill Dingus, who is asking for bids to replace the aging furnace.

“We’ll be getting bids quickly,” she said. “Once they choose a contract, it will take about three weeks to fix.”

Damron said parts of the old furnace, as well as asbestos, would have to be removed in the repair work.

She said she hopes the financial situation turns around for the center.

“I would hate to see this place closed,” Damron said. “I’m going to do everything I can to try to stop that.”

The CMO is organizing the annual holiday giveaway for the week before Christmas.

Donations of new toys are needed for the effort. Damron said those can be dropped off at the center now.