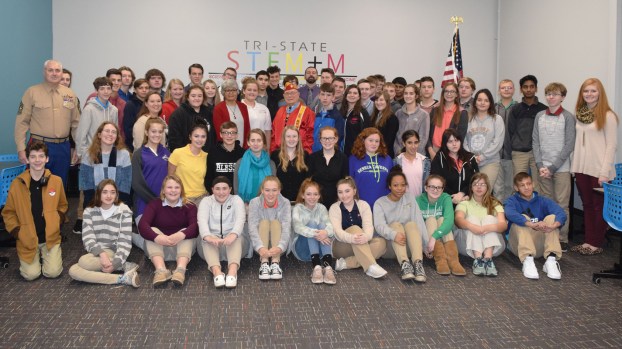 Students and faculty at the Tri-State STEM+M Early College High School in South Point gathered for a group photo with World War II veteran and Medal of Honor recipient Hershel Woodrow "Woody" Williams following his presentation at the school on Monday.

Williams, 94, of Ona, West Virginia, who was honored with the medal for his actions in the Battle of Iwo Jima, is its second oldest living recipient.

Williams spoke to the students on the idea of serving to contribute to something larger than oneself and urged them to give to their country in their future careers.

He said life is about circumstances that shape us and urged the students to make the most of the positives in their life and allow them shape them for the better.

There is much for younger generations to learn from those who came before, especially the few remaining World War II vets, and it is a blessing that so many in our region have had a chance to hear from those people like Williams.

We thank Williams for his service, for which he has been well-honored, as well as his efforts to continue to inspire the leaders of tomorrow.

Williams’ visit to the STEM+M school came thanks to the efforts of  Paul Sites, whose two daughters attend the school.

Sites first met Williams while serving in the military in 1994 and the two have remained in touch ever since, appearing together at events. He approached the school with the idea of having Williams speak, to which they happily agreed.

We commend him for his work in making this happen for the students.

Williams has taken the circumstances of his honor and has remained committed to his civic duties for decades. His appeance at the school was a unique experience and all those who heard him speak can be thankful.

It is difficult to pinpoint a particular moment in time when the American project began to falter. We came out... read more